Thanks to TB for the photography – and the duck tureen!

I think I’ve mentioned this previously, but I’m a sucker for fairy tales. I still have the picture books from my childhood that transported me to magical kingdoms of princesses who dance their slippers to pieces every night, poisoned apples that send one to sleep for 100 years, enchanted forests that hide wolves in granny’s clothes, beasts that are transformed into handsome princes, and glass slippers that lead the way to true love.

Most of us probably know that the Disney versions of fairy tales are heavily bowdlerized, made pretty for children and to incorporate modern sensibilities. The original tales are much darker, bloodier and if you stop to think about it, highly depressing. Parents abandoning their children, or in the case of the story The Juniper Tree, actually murdering them. Stepmothers hating their stepchildren so much they plot their deaths. Gruesome acts of self-mutilation or dismemberment……all to be put right at the end when the hero or heroine either complete a task, or prove their honor and loyalty.

What’s ultimately the thing to remember about fairy tales is that they not only reflect the times in which they were originally written and conceived, they also still reflect some realities in this day and age. Sadly, parents still to mistreat their children in terrible ways, and we as a species still seek to escape from horrible truths by retreating into fantasy worlds such as fairy tales, where wishes often do come true. 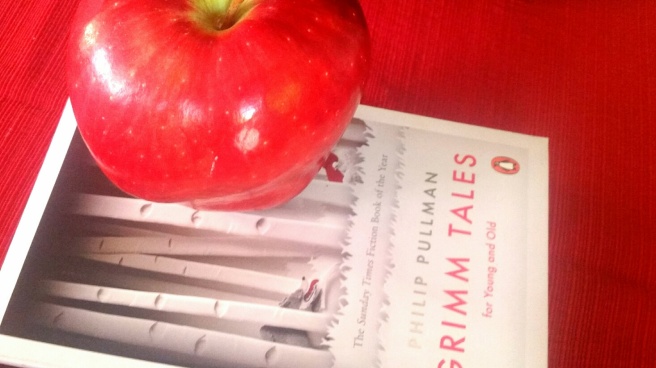 Food in fairy tales always has interesting symbolic meaning, usually representing either starvation or plenty. Magical pots abound, providing nourishing and luxurious meals when wished upon. Families abandon children because there is no food. Enchanted cottages are made of gingerbread and chocolate. Cakes and wine are taken to grandmothers. Rapunzel leaves are coveted and traded for a child. Breadcrumbs are used to find the way back home, and enchanted speaking animals such as goats, fish and ducks, are wished upon then eaten. The concept of meals being created out of thin air from simple wishes is particularly fascinating me, as a cook.

Pullman’s retelling of the classic tale “One Eye, Two Eyes and Three Eyes” was both funny and sad, with the two deformed sisters constantly torturing their sister with two eyes – the normal one. It has the classic fairy tale devices of making wishes, with Two Eyes attempting to make her life better by wishing for nourishing meals from her magical goat, after singing her sister to sleep. 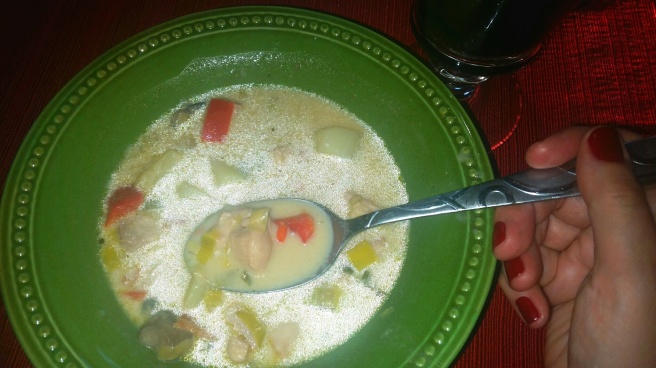 One Eye’s single eyelid drooped and sank lower and lower and finally she started snoring. Once Two Eyes was sure her sister was fast asleep, she said: “Little goat, bleat, bring me good things to eat.” And at once the magic table appeared, and on it there was leek soup, roast chicken, and strawberries and cream.

A combination of leek soup and chicken seemed in order, on this gloomy Sunday, so I decided to make a cream of chicken and leek soup. This is the method that worked for me, based on a recipe I remember my grandmother making many times – potato and bacon soup – combined with my own tried and true cream of chicken a la king soup recipe. 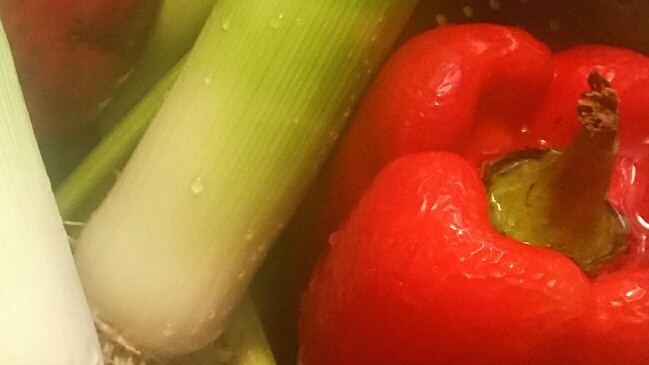 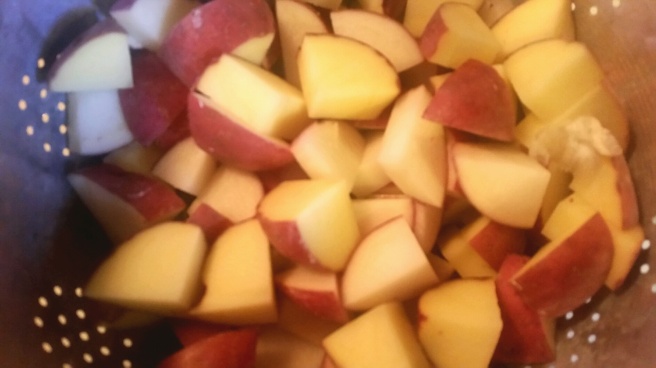 METHOD
Snip the bacon into small pieces. Put them into the oil in a hot pan. Cook for about 7-8 minutes, until the bacon starts to crisp. Make sure the bacon is well cooked before moving to the step below, otherwise you’ll have soggy bacon. Eeeeeewwwwww.

Remove the crisp, cooked bacon to a paper towel to drain. Add the butter to the oil in the pan. Add the sliced leeks, garlic, celery and red pepper. Stir around until they begin to soften, between 10-15 minutes.

Add the chicken bouillon paste and tomato bouillon cube, and whisk in well. Lower the heat. Then add the mushrooms and stir again so that everything is well coated with the oil and butter.

In a separate bowl, whisk together the flour with a half-cup of the chicken broth and a splash of the white wine, mixing together to make a smooth paste. Stir into the pot of vegetables and cook another few minutes until a somewhat thick, creamy sauce forms.

Add the rest of the chicken broth and the wine. Add the potatoes, the chicken, and the crumbled-up bacon, and season the concoction with salt and pepper.

Bring to a boil, lower the heat and allow to simmer, covered, for up to 45 minutes, to ensure the potatoes cook through. The longer you cook this delicious soup, the more the flavors will mingle. Plus, the great thing about using chicken thighs is that they actually do better when cooked long, low and slow. So take that, all you breast people out there! 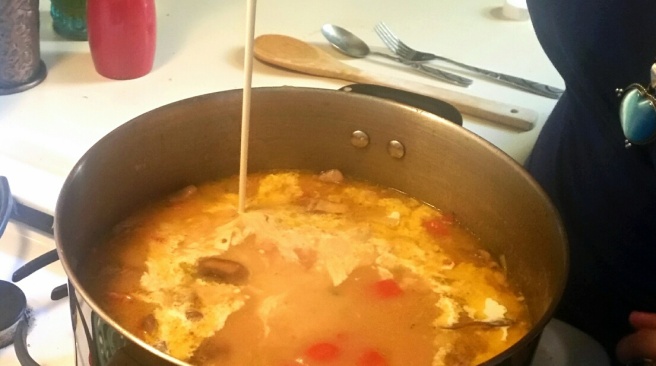 Stir in the cream and cook another couple of minutes, but keep an eye on it so the cream doesn’t curdle. Remove from heat and decant into a large, duck-shaped, soup tureen. Because there is always room for kitsch in the kitchen. Or you can just do what I did and pretend it’s an Enchanted Duck that made the soup appear from thin air. Quack quack.

The soup is delicious! Velvety texture, creamy and chickeny, with the savory vegetable flavors mingling with the starchiness of the potato and the salty bacon. Hell, you can’t get any better than that!