I have to say I’m a bit peeved by this book. The Dinner List has a totally fascinating premise that takes that old idea of picking five people you’d want to have dinner with, whether living or dead, and runs with it………..and then, sadly, totally drops the ball. The main character, Sabrina, is having her 30th birthday dinner with her best friend, when unexpectedly, five people show up, including the late, great Audrey Hepburn. 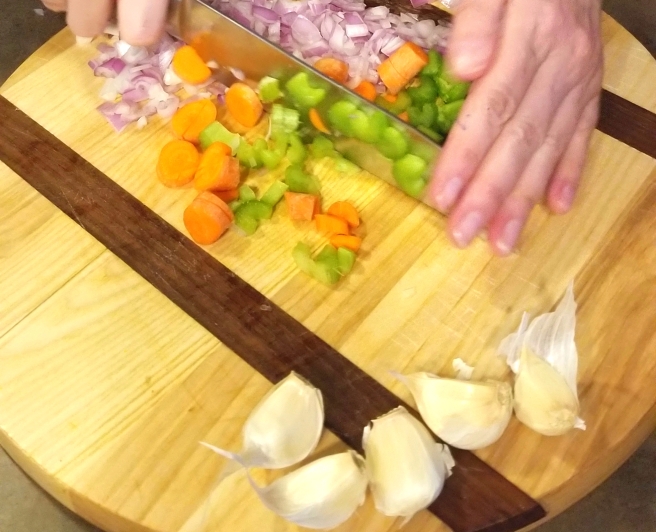 Yes, Audrey is a guest at this dinner party. Turns out that Sabrina was named after the iconic, eponymous character from Audrey’s film also starring Humphrey Bogart. The other guests are people who Sabrina hasn’t seen for years and all of whom have had a significant impact on her life. Her long-lost father shows up, an influential professor from her college days, and Tobias, who is presented as her ex with whom she lived for many years. So yes, the premise is fascinating and had so much potential to be a wonderful book about our life influences, who we would like to see and talk to, the meaning of life, etc. But irritatingly, it ends up being a treatise on getting over one’s first love. In other words, it’s chick-lit and we all know how I feel about chick-lit. Zzzzzzzzzzzzz.

It turns out Tobias and Sabrina have split up and she is still trying to come to terms with their breakup. They’ve had a typical long-term relationship – meeting in college, becoming involved, breaking up and reuniting, blah blah blah. Literally nothing in their relationship was unique. They were like any other couple. I think what gradually began to wear on me was the fact that this book has one of the most fascinating literary devices I’ve read about in ages – the dinner party with five people of your choice from history or from real life who can be either living or dead – and uses it as the backdrop for what ends up being a rather pedestrian and boring love story.  (sigh) And of course, the great shocker, the major “wow” moment of the book is something that I had figured out from Chapter 2.  SPOILER ALERT: Tobias is already dead and that’s why she has to get over him and that’s why he showed up to this dinner party.

Well hell, no one could have seen that one coming. (As I roll my eyes in exasperation.) I mean, come on. If you could pick any five people from anytime in history to break bread with, wouldn’t you, firstly, choose people with whom you could have conversations about the meaning of life, etc? Don’t you think you’d want to talk about their lives, their impact on the world? My five dinner party guests would include Jesus of Nazareth, Cleopatra, Johannes Gutenberg, Barack Obama and Miguel de Cervantes, and I promise you that we wouldn’t spend a moment talking about our love lives. So therein lies the root of my annoyance. I hate to waste valuable time reading a book that ends up being so completely different from what I supposed it to be. Don’t get me wrong. It’s nicely written and again, the premise had so much potential. But the final execution was just……simplistic, pedestrian. Meh. However, the redeeming feature of the book are the food passages, like this one.

Doesn’t risotto with seafood sound DIVINE? I chose to use shrimp with mine, based on this recipe from The Proud Italian Cook blog.

METHOD
Peel, seed and cube the butternut squash, and roast at 425F for 20 minutes. Remove and allow to cool.

Heat the stock in a large saucepot until simmering, then lower the heat so it stays hot but isn’t boiling.

Heat the olive oil and butter in a large skillet, and sauté the carrot, shallot, celery and garlic for about 10 minutes, until fragrant. Sprinkle over some salt at the beginning of cooking.

Add the Arborio rice to the cooked vegetables, stir together so that the oil and vegetables coat the rice and the rice toasts a bit (called la tostatura) but don’t let the rice burn. Stir for about 5 minutes.

Splash in the half-cup of white wine and stir again. 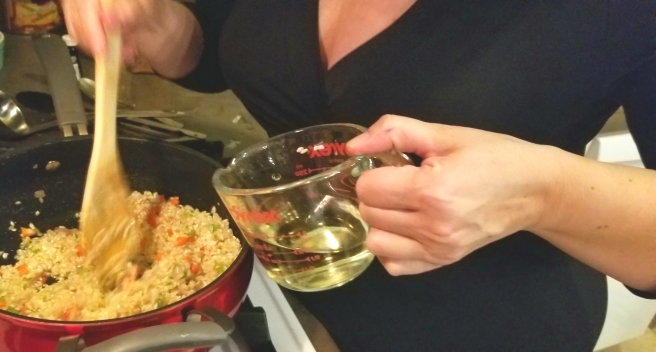 After about half an hour, the rice should have absorbed all the liquid and cooked to a fluffy yet al dente (to the tooth) consistency, meaning it should still have a bit of bite in texture. Add in the butternut squash and stir together to mix.

In a hot stovetop grill pan, cook the shrimp about 2 minutes per side, until pink and cooked through.

Add to the rice and squash mixture, and toss over some finely chopped fresh sage. Salt and pepper to taste, and apply to your face. DIVINE!