You can almost feel the Italian heat baking down, and smell the bougainvillea flowers, as you read this evocative novel, The Talented Mr. Ripley. Tom Ripley is a young man from New York, struggling to make something of himself. He’s approached by Mr. Greenleaf who mistakes him for a close college friend of his son, Dickie, who has run off to seaside Italy and essentially gone native there, living in a little house with his girlfriend Marge.

Mr. Greenleaf offers Tom money to go to Italy and persuade Dickie to come back and resume a “normal” life. Tom meets Dickie and becomes caught up in the other man’s life, obsessively. They bond and become great friends, but several flies in the ointment, including Dickie’s quasi-girlfriend Marge and his obnoxious drinking buddy Freddie Miles, soon threaten their close bond. 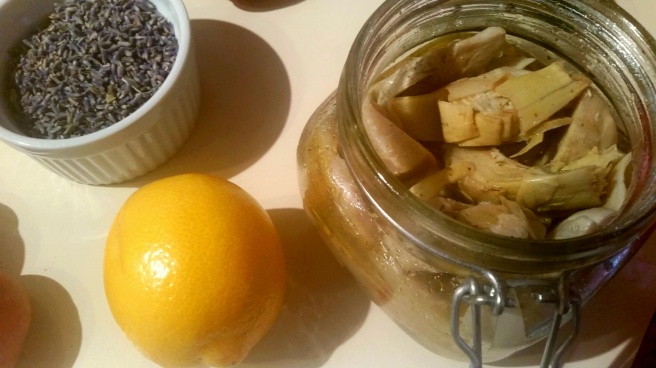 What makes Tom Ripley such a fascinating character study, psychopath that he is, is because we can all relate to him – having feelings of alienation and wanting to find an identity that matches our images of ourselves. Ripley is self-aware on a bizarre level, understanding his two identities and even acknowledging what he’s done by justifying his actions to others and himself. Yet for all the evil deeds he does, he’s not a classic antagonist. He is living his “normal,” as we all are, and the fact that I could sympathize and root for him and understand his motivations tells me that this book was written by a master. It didn’t hurt that the characters of Dickie, Marge and Freddie were all such annoying little prigs. 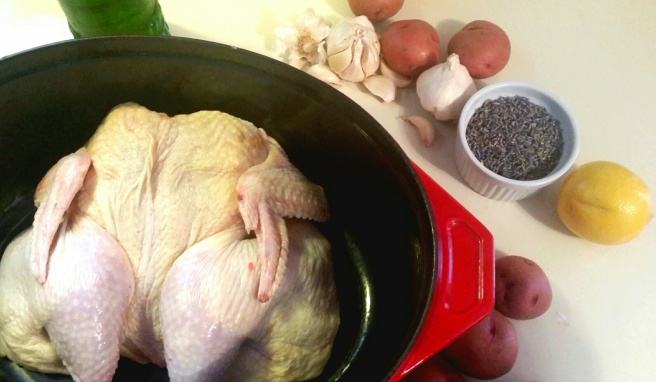 Set primarily in Italy, then in France, the scenes in these countries evoke so wonderfully the Mediterranean sun and sea, the taste of salt from the ocean, the sound of boats and birds and busy harbors, and the marvelous flavors that these two countries sometimes share. When Tom is invited to Dickie’s house in Italy for the first time, Sunday lunch is being cooked by Marge – a roast chicken and artichokes –  two of my favorite foods. Yum! 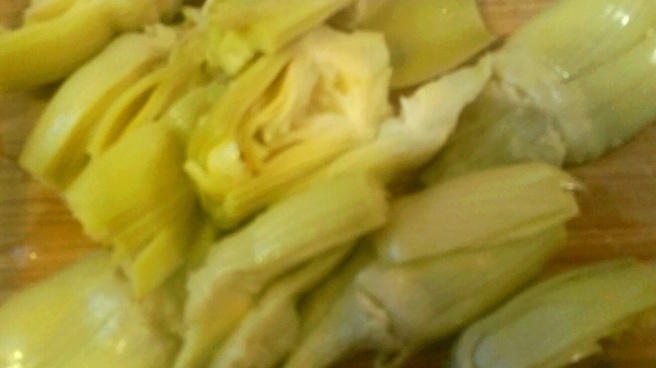 “The climb up the hill to Dickie’s house didn’t seem half so long as before. Delicious smells of roasting chicken drifted out on the terrace……….’I’m waiting for the darn artichokes to get done. You know that front hole. It’ll barely make anything come to a boil.'” 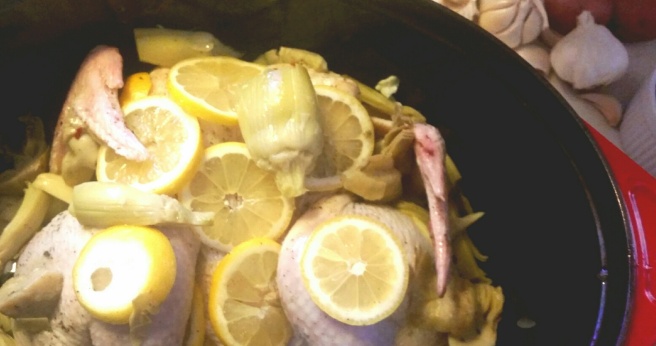 Having recently gotten my hot little hands on some culinary lavender, I decided a riff on the classic Sunday roast chicken was in order, spiced up with lavender, lemons, garlic, new potatoes and of course, artichoke hearts – a wonderful melding of the flavors of France and Italy. Oooh la la, or as we tend to say here in New Mexico, oooooh a la! 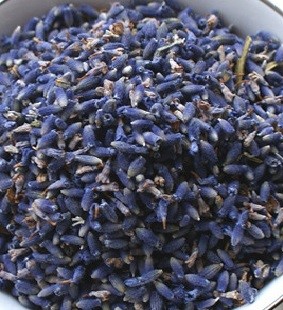 This is the method that worked for me.

METHOD
Your chicken should be at room temperature before roasting, so take it out of the refrigerator a good hour before starting preparations.

Pre-heat the oven to 360F. Butterfly the chicken. This is much easier than you might think. Turn the bird breast-side down, tailside facing you, and cut out the backbone using very sharp kitchen scissors. Then turn it over and press down on it so it flattens and looks like a butterfly. Hence the term “butterfly the chicken.” This YouTube video was how I learned, and it was so easy. If a total klutz like me can butterfly a chicken, you most certainly can! Trust me. https://www.youtube.com/watch?v=l-8tMEwBnSA 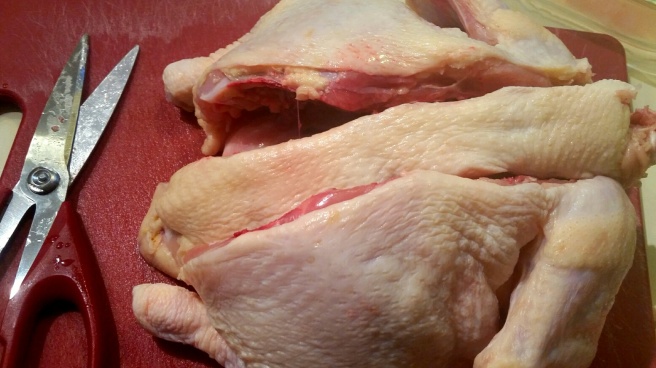 Once the chicken is laid out nicely in a large roasting pan, salt and pepper it well. Slice the lemons somewhat thinly, and lay them across the skin of the bird. Tuck some of the lemon slices between the skin and the meat, as well. This helps tenderize the bird and gives more flavor to the skin. Keep half of one of the lemons for later. 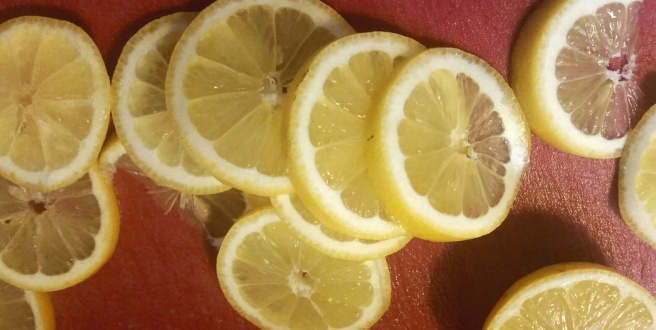 Around the chicken, dot the artichoke hearts, the garlic cloves still in their papery skins, and the potatoes. The idea with the garlic is that they will steam inside the skins and come out soft and sweet and mellow and delicious. Everything looks beautiful in the pan, too. 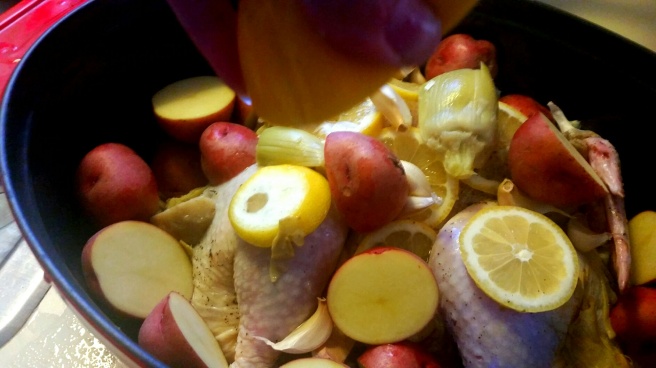 Pour the olive oil over the bird and the surrounding vegetables, ensuring everything is well-coated. Add a splash of good red wine, then squeeze the juice of the remaining half lemon over the vegetables. For the final touch, scatter over the dried lavender and the thyme sprigs. The scent is heavenly, spicy and floral and warm at the same time. 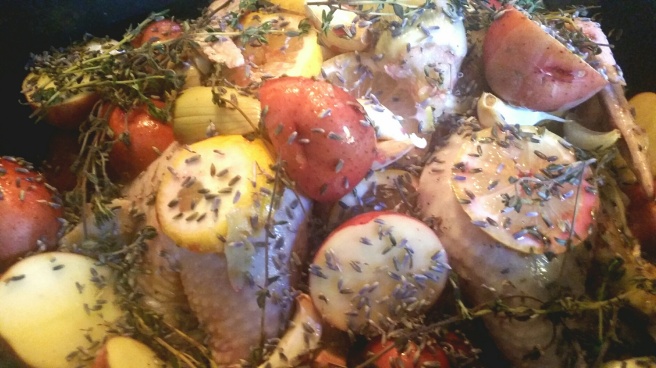 Cover the bird and roast for 2 hours. The smell of the bird cooking, mingled with the lavender and all the yummy vegetables, will make your mouth water. At the 2-hour mark, remove from the oven, increase the heat to 425F, take off the cover, and baste the chicken and vegetable with the pan drippings that have collected at the bottom of the pan. Pour in some chicken broth if you think it looks dry. Tuck the uncovered pan back in the oven and roast under the high heat for another 25 minutes, so the skin darkens and crisps up. Keep an eye on it, though, to make sure the vegetables don’t burn. 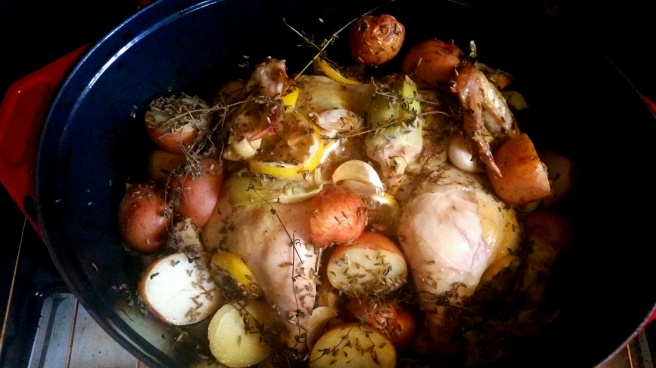 Remove the chicken from the oven, sprinkle over some sea salt, and let the dish rest for a good 10-15 minutes. Then serve and eat with a smile on your face and a song in your heart. But don’t actually START singing. You’ll frighten your guests and they’ll start thinking you’re a madman like Tom Ripley or something. 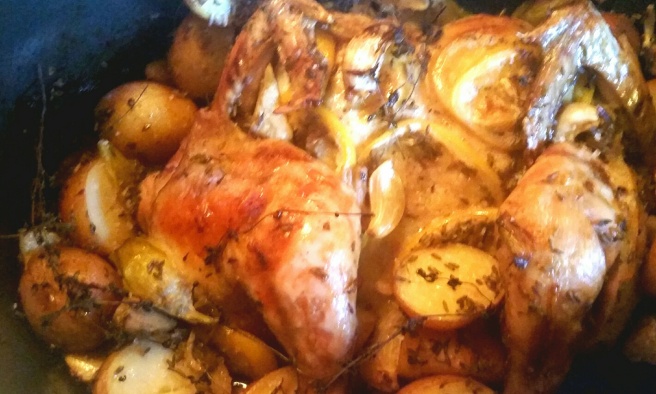 32 thoughts on “The Talented Mr. Ripley by Patricia Highsmith”