The latest episode of “Cooking the Books” Podcast just dropped, and it’s a good one! We’re talking green chile, blue corn, witches and mysticism, one of my exes and his hilarious dislike of the writer, and the author himself, my friend, the late, great Rudolfo Anaya, so give it a listen!

The news of the death of Rudolfo Anaya hit today. He was not only a world-renowned author, he was also a dear and cherished friend, mentor, and counselor. I was fortunate to have met him 20 years ago and we developed a wonderful friendship. He encouraged my writing, persuaded me to attend graduate school, and was overall one of the most wonderful, generous and kind humans in this world. I will miss you, dear Rudy. Que descansa en paz. I repost this blog in your honor.

Rudolfo Anaya is considered the seminal author on the Chicano experience. He was born in New Mexico post-WWII, and became an English teacher and then professor at the University of New Mexico. Not an unusual trajectory for a published author, but what makes Anaya unique, both on the world stage and to me personally, is the fact that he really was one of the first published and widely-read Hispanic authors.

Bless Me, Última was his first published work, and it tells a universal tale of a young boy named Antonio and his coming of age, the mentor – in this case, an old woman called Última who is a curandera (a healer, in Spanish), and some say a witch, as she has an owl that accompanies her everywhere and is her familiar – and his subsequent questioning of all that he has been raised to believe. Antonio and Última’s friendship becomes the bedrock of his life, and from her, he learns the use of herbs as medicine and magic, the nature of good and evil, and what it means to love and lose. In short, all the lessons we learn growing up.

The reason this book means so much to me is because it was the first book I ever read that actually, and accurately, described what it was like growing up Hispanic in New Mexico. The Spanish phrases that Antonio’s parents use were all used by my grandparents and great-grandparents. All of the healing methods that Última teaches Antonio were used regularly by my Great Granny Baca, and both of my grandmothers. Most vibrantly, I remember Great Granny Baca sweeping up my Great Grandpa Baca’s hair after she’d given him a haircut because “no le quieren las brujas.” If you read the section about the witches – the infamous Trementina sisters and their curse on Antonio’s uncle Lucas – you will know exactly what I am talking about. And of course, the food they ate – beans, chicos, tortillas, atole, green chile – those were the foods I grew up eating.

I spread the blankets close to the wall and near the stove while Última prepared the atole. My grandfather had brought sugar and cream and two loaves of bread so we had a good meal. “This is good,” I said. I looked at my uncle. He was sleeping peacefully. The fever had not lasted long. “There is much good in blue corn meal,” she smiled. The Indians hold it most sacred, and why not, on the day that we can get Lucas to eat a bowl of atole then he shall be cured. Is that not sacred?”

Atole is a traditional New Mexico drink made from finely ground blue corn served with hot milk and sugar. It’s very good, although for someone like me, who doesn’t have much of a sweet tooth, it’s not something I ever considered making as an adult. I did, however, start thinking about blue corn in general and wondering how it would taste cooked as a sort of savory oatmeal. I’d never cooked with blue corn before, and when I researched cooking methods, ironically, the grossest-sounding recipe for it was on the New Mexico True website, which included quinoa, pinon and raisins. What the hell? Who in their right mind would cook traditional atole with quinoa and raisins? Blech. So I dug a bit more and found this New York Times recipe for blue corn cakes, which I tweaked a bit and used as a basis for my own unique New Mexico dish – savory blue corn cakes with poached eggs and green chile. You can’t tell me that doesn’t sound divine! 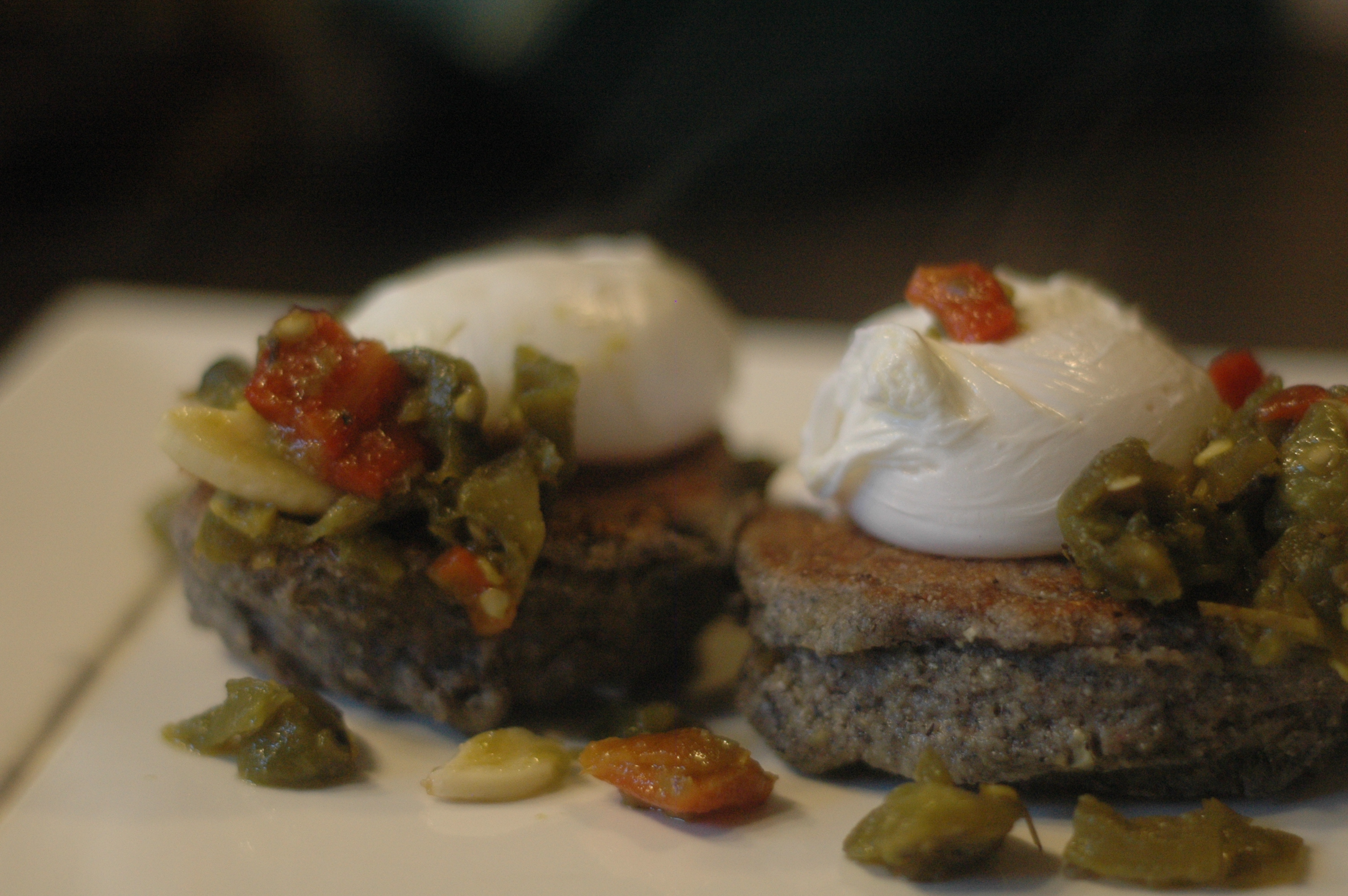 METHOD
Mix the blue corn meal, the flour, the salt, the pollo de caldo, and the baking powder together. Set aside.

Whisk the egg yolks with the heavy cream and the water, then beat the egg whites until foamy, add to the yolk and cream mixture, and stir again. 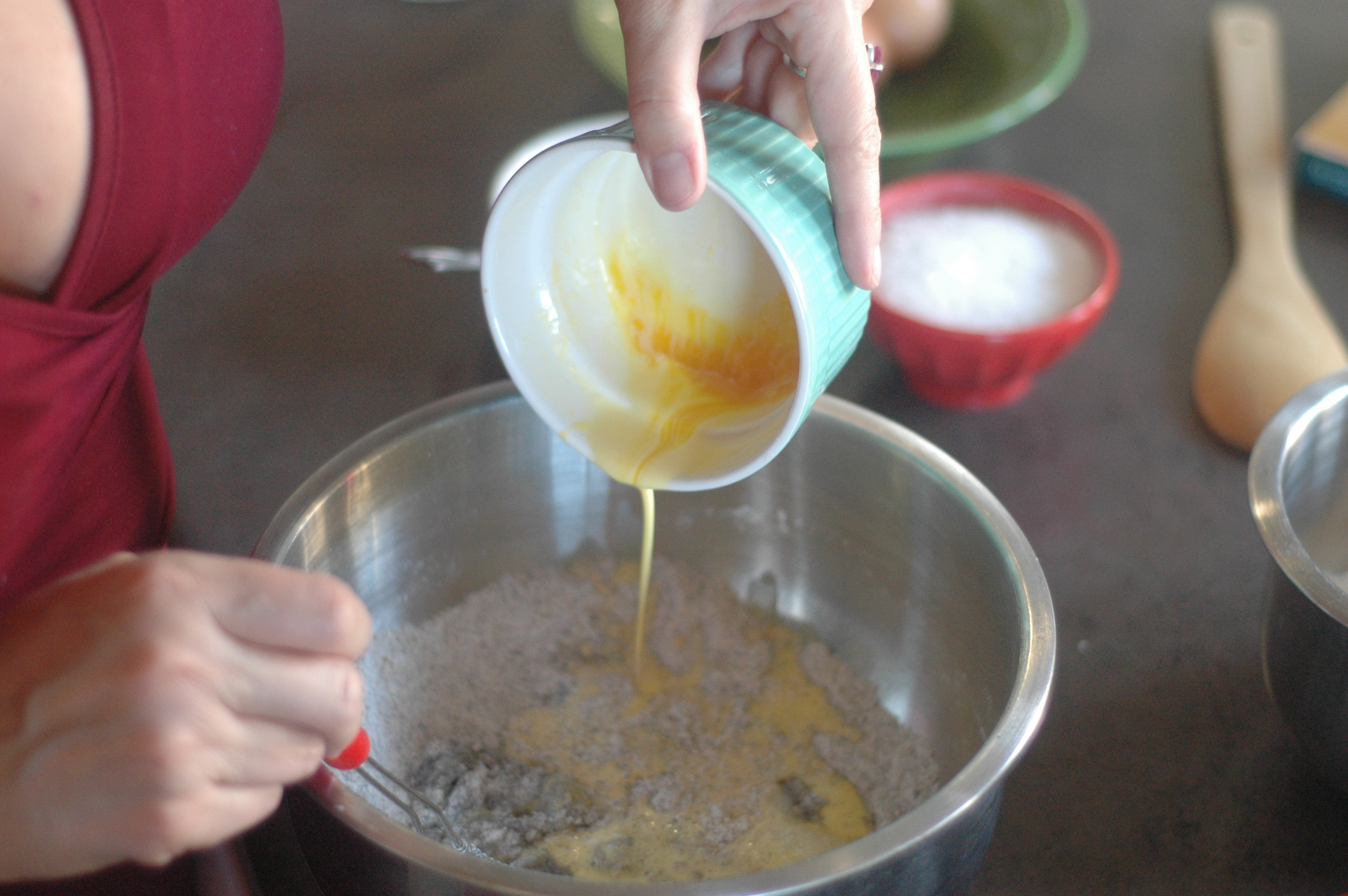 Gradually add in the blue corn and flour mixture, and add the melted butter. Stir again, and refrigerate for about 30 minutes.

Heat a non-stick pan with a teaspoon of olive oil, and in a separate pan, heat together some salted water with a tablespoon of vinegar. This is for poaching the eggs.

Put the blue corn cakes into the hot oil in the pan. Cook for about 1-2 minutes per side. Lay on a platter.

Poach the eggs. Stir the hot water and vinegar until you get a good whirlpool action going, then gently crack in the eggs and let cook until they firm up.

Put the blue corn cakes on a plate, and put a poached egg on top. Season with salt and pepper, then ladle over the hot green chile. Eat with joy and happiness in your heart, because this really is New Mexico soul food, with a twist.