I haven’t felt much like posting over the past few weeks. The ongoing coronavirus situation continues to scare me, even though I am doing all the recommended things the CDC has instructed: social distancing, frequently washing my hands, covering my cough, cleaning and disinfecting frequently-used items and surfaces, checking on elderly neighbors, and trying not to panic but instead be prepared. I have limited my reading of the news to the simple facts of new cases, what to expect from our Governor in terms of closures and service limitations, and I am cooking like a madwoman to feed my elderly neighbor who is blind, my grandmother who is 95 and in fragile health, and other family members who are also self-quarantined…..and to keep myself calm. I am also watching quite a lot of Netflix and Amazon Prime, and in fact, last night decided to rewatch a film I hadn’t seen in years and didn’t find terribly funny at the time – My Big Fat Greek Wedding.

Well, hell. It’s hilarious! I don’t know what was wrong with me when I first saw it but on second viewing I literally snarfed wine as I watched the shenanigans of her loud, obnoxious, and loving Greek family. If you haven’t seen the film, the basic premise is this: Toula Portokalos is a frumpy, 30-year old woman living at home with her very traditional Greek family. Her father, Gus, is uber-proud of their Greek heritage, having their house painted in the blue-and-white colors of the Greek flag. He and his wife Maria own the Greek restaurant Dancing Zorba’s, where Toula works as a waitress. One day, she sees Ian Miller and falls for him, though she is so socially awkward that her attempts to talk to him fall somewhat flat. She soon starts to stretch her wings by taking computer classes, which in turn help her confidence to the point where she gets a haircut and a makeover, buys new clothes, and convinces her father to have her work at her Aunt Voula’s travel agency. She meets Ian again, they fall in love and he proposes. But…….no one in her Greek family has ever married a non-Greek, so bringing this outsider into the family has some complications.

The fact that Gus goes around with a bottle of Windex claiming it as a cure-all for any and all health issues took me back to my great-grandfather Reymundo who fixed anything and everything with duct tape and baling wire, and my great-grandmother Antonia who sprinkled holy water on everything as her own cure-all. The scene where Toula’s brother and cousins keep teaching Ian inappropriate phrases in Greek knowing he doesn’t understand brought back memories of my own male cousins totally messing with one of my female cousins’s future husband. Aunt Voula’s horror at finding out Ian is a vegetarian brought back memories of me introducing a college friend (and vegan) to my grandmother and her offering him beans and chile – that were cooked with pork. 🙂

I suppose part of the humor of this film is the familiarity. So many of us come from large, loud, “ethnic” (for lack of a better way to put it) families that are like this. My own paternal side of the family lived in what we call the “compound,” with three family houses next to one another on the same three family-owned acres and as kids, we’d run between all three, visiting our great-grandparents, our aunt and uncle and then back to our grandparent’s house. The familiarity of how the Portokalos family is portrayed was as comforting as it was funny, which is what we all need in this very nerve-wracking time. Comfort and humor go a long way toward calming and settling the soul. 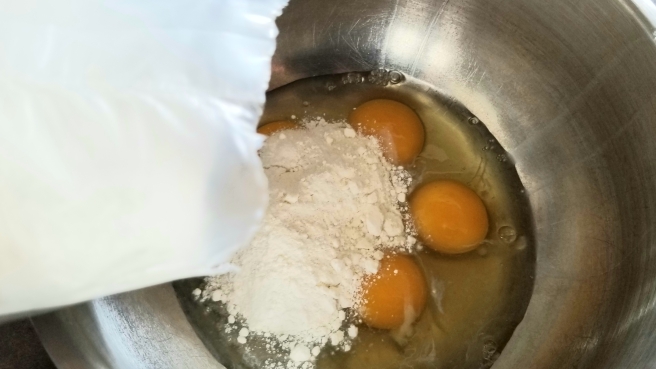 Possibly the funniest moment in a movie filled with laugh-out-loud moments is when Ian’s very reserved, Caucasian parents come to meet Toula’s parents – and the rest of their enormous Greek family – after the engagement, and Ian’s mother brings a Bundt cake. Maria and Gus have never seen a Bundt cake before, and the ensuing language culture clash is beyond funny!

So of course I had to make a Bun-Bo-Bunk-Bonk-Bundt cake! I have my grandmother’s Bundt cake pan that she used to make all of our birthday cakes every year, and my favorite being her traditional rum cake with pecans and a sugar glaze, I decided to recreate that. DISCLAIMER: I am not one to EVER use a cake mix from a box, but in the spirit of tradition and comfort, I followed my Nana Jean’s recipe to the letter and it involved a yellow cake mix. (sigh) Don’t judge me. 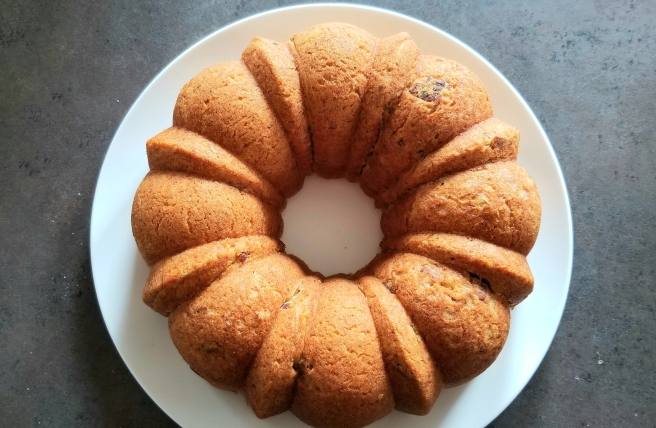 METHOD
Heat the oven to 325F and spray your Bundt cake pan with baking spray. 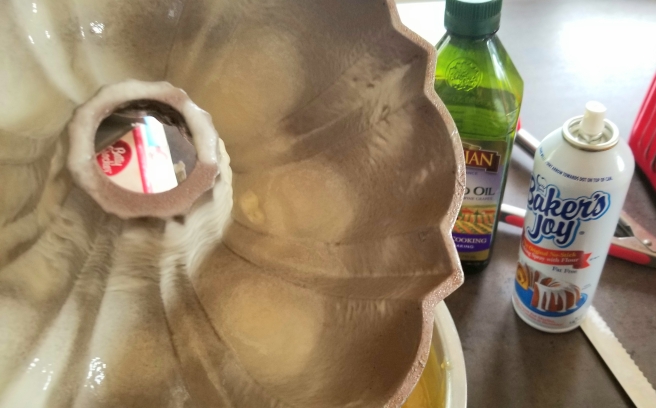 In a large mixing bowl, combine the cake mix, the pudding mix, the eggs, the oil, the rum, and the nuts. 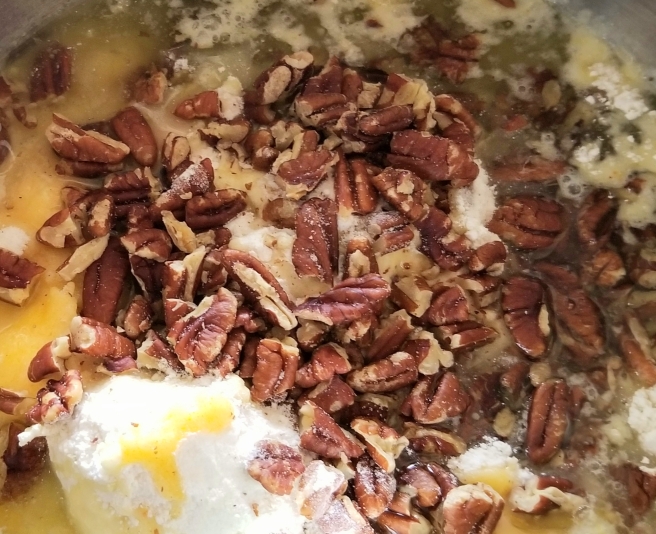 Pour into the Bundt pan and bake for an hour. 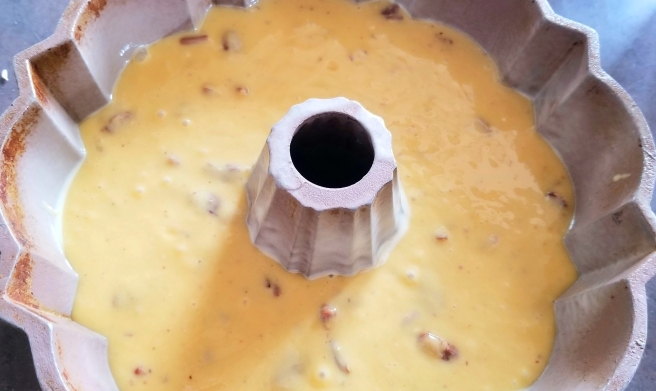 Let the cake cool while you make the glaze. Melt the butter in a small saucepan and add in the water and sugar, stirring constantly. Don’t leave it as the sugar burns very easily. Boil for about 5 minutes, stirring all the while, until it thickens, then add the rum.

Drizzle over the Bundt cake.

If you so happen to have one, garnish with a lovely potful of flowers! Just like Mama Maria! 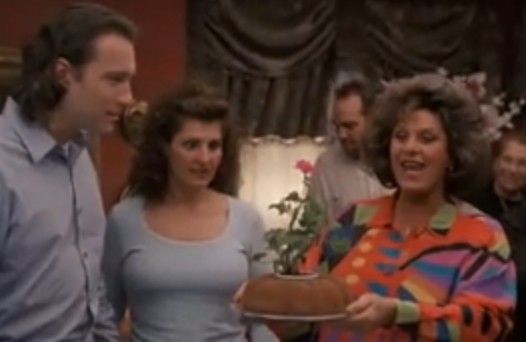 One of the most verbose and least credible narrators I’ve come across in recent literature, the hero of The Debt to Pleasure, one Tarquin Winot, is a total and complete food snob. He opens the book with the line “This is not a conventional cookbook,” and no, it most certainly is not. Just as Tarquin himself is not a conventional foodie, though he is  highly intelligent, erudite and a horrible egomaniac. Here’s one of my favorite of his lines that tells you who you’re dealing with: “I myself have always disliked being called a ‘genius’. It is fascinating to notice how quick people have been to intuit this aversion and avoid using the term.” 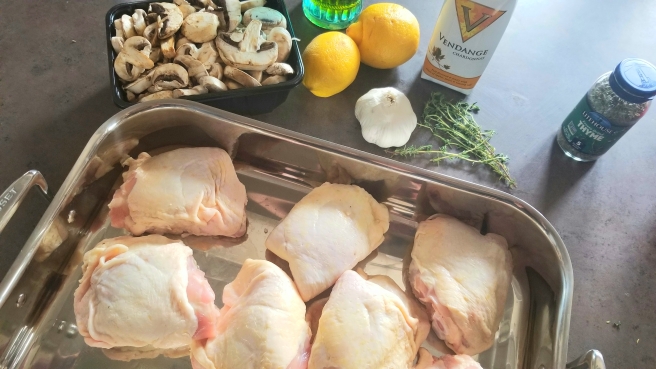 Reading this book was a bit of a slog for me, though I enjoyed it thoroughly, because of the sheer amount of long, run on sentences and wordiness of each chapter. The book is broken into seasonal chapters, opening with Tarquin giving a few suggested menus for Spring, Winter, Summer and Fall…..though not in that order. I was put in mind of Nigella Lawson’s first book How To Eat, where she talks about the concepts of French cooking and how they informed modern British palates and food. Tarquin is an Englishman currently living in France, and as the story gradually unfolds, you start to see the dark and sinister undertone to his words. Little by little, you realize exactly who he is and what he has done. It’s a lovely slow burn.

He is a food philosopher, beyond anything else. When talking about seasonal food and what is appropriate for spring, he waxes philosophical on the theme of lamb and how it ties in with the concepts of rebirth, sacrifice and why it’s eaten both in the springtime and around Easter. This is not new for any foodie or student of history, but his greatly entertaining way of expressing himself makes reading about the blood of the lamb so very unique.

He waxes rhapsodically about the delights of food in such a delicious, mouthwatering way that you can’t help but feel your tummy growl in response. He is also the biggest prick when it comes to everything and anything else, as evidenced by this zinger: “I could forgive her many things, but his Welshness is hard to bear.” Ouch! Also, hilarious! But it was this passage that enticed me into making a delectable chicken dish that I got from Nigella herself, coming directly after his musings about lamb in springtime and how certain culinary constructs lend themselves very well to certain and specific food pairings:

“These combinations have a quality of a logical discovery: bacon and eggs, rice and soy sauce, Sauternes and foie gras, white truffles and pasta, steak-frites, strawberries and cream, lamb and garlic, Armagnac and prunes, port and Stilton, fish soup and rouille, chicken and wild mushrooms; to the committed explorer of the senses, the first experience of any of them will have an impact comparable to an astronomer’s discovery of a new planet.”

METHOD
Heat the oven to 375F and lay the room-temperature chicken pieces into a large baking tray. I got to use one of my Christmas gifts for this dish – my gorgeous stainless steel Le Creuset roasting pan!

Quarter the two lemons and tuck them in and around the chicken pieces.

Break the garlic cloves from the head – leaving them unpeeled – and dot them around the chicken and lemon chunks. 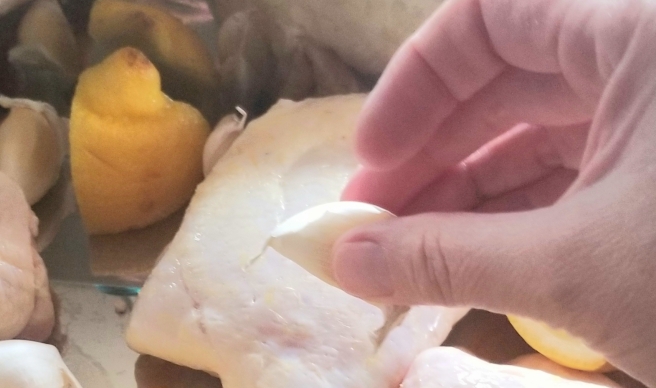 Pour the white wine and then the olive oil over the chicken, lemon and garlic pieces, and sprinkle over the dried thyme.

Season generously with salt and pepper, and dot the fresh thyme sprigs around the pan. Cover with foil, and roast for two hours at 375F.

At the 2-hour mark, turn the oven up to 450F and take the foil off the chicken. Roast another 30-45 minutes, until the chicken skin gets crispy and bronze and the garlic and lemon are steaming and caramelized. Serve with some sautéed mushrooms and ponder the philosophy of food. 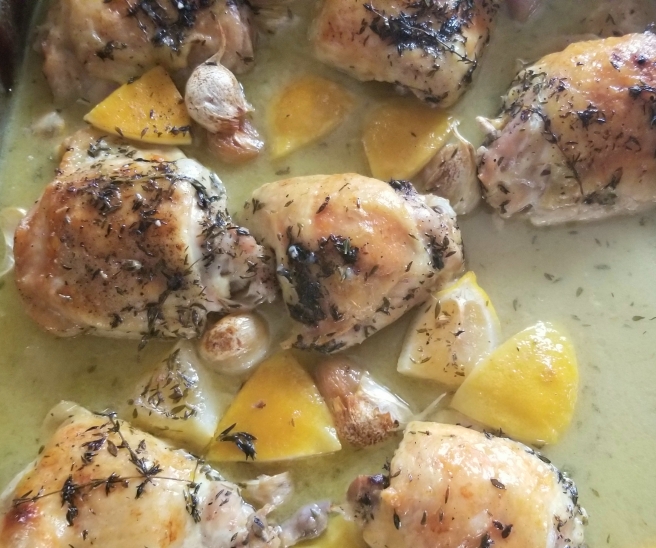 The Beauty Of Thoughts
Portly Gourmet