I found The Fifth Gospel to be quite a great read, fast-paced and adventurous, but with a fascinating historical and Biblical premise as the storyline. It’s simple – a Greek Catholic priest living in The Vatican must defend his brother, also a Greek Catholic priest but one attached to the Pope’s staff, who is accused of murder. The victim? An artist who recreated the Shroud of Turin for a Papal art show and made a discovery that could possibly turn the Catholic Church upside down.

It’s very well written, heavy on Church history (which I like) and yet has a human side in the main character of Father Alex Andreou, whose desperate efforts to prove his brother innocent are matched only by his dedication to the Greek Catholic church, raising his son Peter, and hoping his estranged wife Mona will return to them both. She does, mysteriously one evening, and when she reunites with Peter, she brings dinner with her, in that clever way women have of knowing that the best way to a man’s heart is through his stomach.

“Mona reaches into a plastic bag by her feet and says ‘I brought dinner.’ ‘A gift,’ she clarifies. ‘From Nonna.’ Peter’s maternal grandmother. I recoil. Peter looks at the Tupperware and says…….’My favorite pizza is margherita.’ ‘I’m sorry,’ Mona says, crestfallen. ‘All I brought is some cacio e pepe.’ Tonnarelli with cheese sauce. The devil inside me smiles. Her mother’s version of the dish will be too peppery for Peter. A fitting introduction to the mother-in-law I always found to be an acquired taste.”

This post came about, in part, from an IM conversation I had with my friend Luca Marchiori of Chestnuts and Truffles. Luca is not only my cooking hero, he’s a marvelous chef, a talented food and travel writer, and takes the most wonderful photographs. He also lives in Italy and gets to travel around that beautiful country ALL THE TIME. Is it any wonder I want to be him? 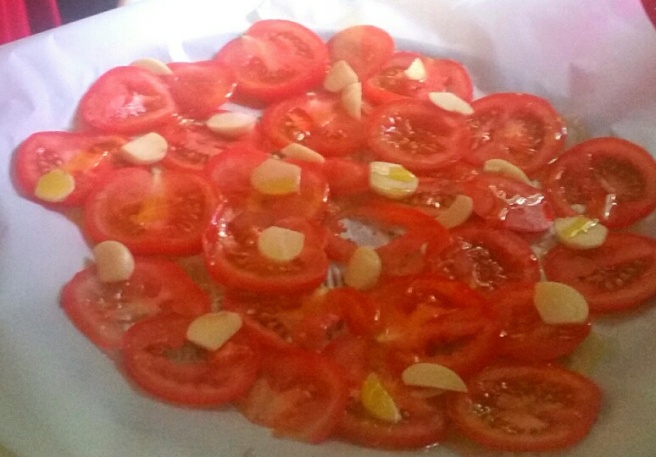 Anyway, I’ve gotten in the habit (annoyingly to Luca, I’m sure!) of asking his advice about the week’s upcoming blog post and my thoughts on how to make my recipe unique. Cacio e pepe is a traditional pasta dish that features three major ingredients – pasta, pepper and cheese. You really can’t go wrong with that trio, but I wanted to add my own unique twist on the recipe, so I asked Luca what he thought of perhaps a margherita-style cacio e pepe, combining two food descriptions in the passage above. 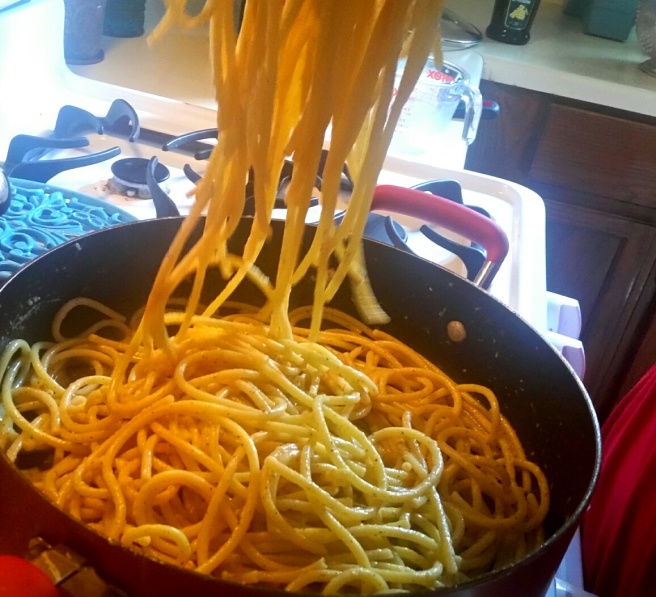 Luca didn’t think combining two separate pasta dishes into one was the best way to go, and when I mentioned wanting to make something one’s own, he talked about the writing of Philippe Conticini, who was, in Luca’s words, “a great patissiere who had the philosophy that when you were revising classic dishes you should make sure you keep all the original ingredients and not add more. Change the way they are put together rather than leaving out or adding.”

Something to consider. So, rather than trying to make it into something unique, I decided to challenge myself by simply recreating this classic recipe, and having roasted tomatoes on the side. Not IN the dish, Luca, so calm down. But as a garnish. And guess what? It worked!

This is the method that worked for me, based on this article from Business Weekly, featuring the late, great, notorious Anthony Bourdain – my future husband – in Rome. I mean, Bourdain, Italy and pasta – the holy trinity, in my book. (And very fitting for today’s post!) 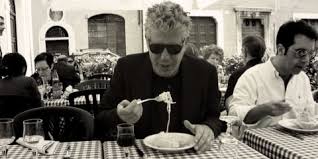 METHOD
Bring a large pot of salted water to the boil. Once boiling, add the pasta and cook for about 6 minutes, until the pasta is almost cooked, but not quite. You’ll see why in a minute. 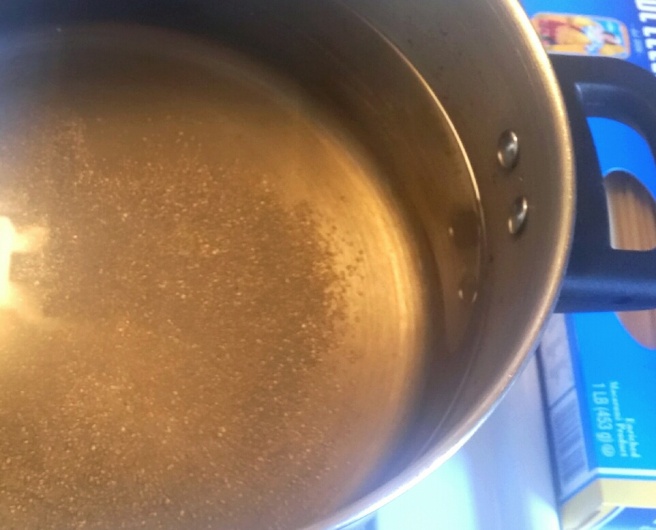 One of the best cooking tips I’ve ever gotten in my life was to save some of the boiling water that the pasta has cooked in, and add a bit to whatever sauce you are making. The starch in the water helps the sauce to emulsify and thicken somewhat, and also adds to the dense flavor. So keep about a cupful of the pasta water before draining the pasta. But do keep some of the water on the noodles. Anna del Conte, the matriarch of Italian cooking and food writing, calls this “la goccia,” which means “a drop” to keep the pasta moist.

In a separate saucepan, add the butter and a very generous amount of freshly ground black pepper. Melt the butter gently over low heat, then add the starchy pasta water. Swirl around to mix.

Add the cooked and drained pasta to the saucepan with the pasta water, butter and pepper. Stir around with tongs to finish cooking the pasta, about 2-3 minutes more. Taste to see if the pasta is al dente, with a small bite but cooked.

Remove from the heat, and add your cheeses to the hot pasta mixture. Stir again to mix and meld all the cheeses. You DO NOT want your cheese to be in lumps, which is why you want to do it when the pasta is hot off the stove. Just stir and swirl with your tongs and pretend you’re one of those bad-ass Italian chefs who have that technique down pat. 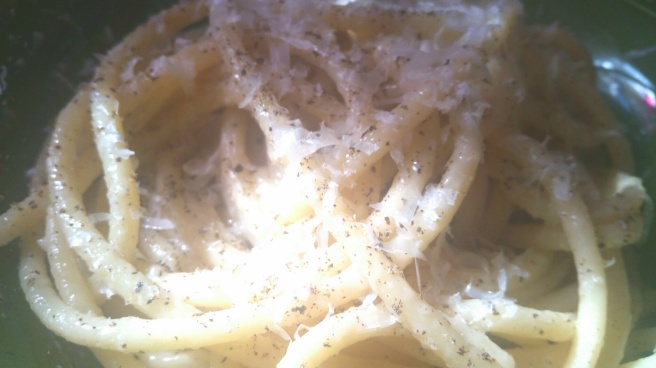 Serve with roasted tomatoes on the side, which are simple to make. Slice the tomatoes thinly, and sprinkle over some slivered garlic. Toss with olive oil and dried basil, and roast at 425 for 30-35 minutes. Remove, let cool for about 15 minutes, then sprinkle over a dash of balsamic vinegar. Salt and pepper as you like.

A dish fit for a Pope!

An interesting microcosm of history, Salt essentially takes us back through the known history of the world, and analyzes how this humble little rock – the only rock humans can eat – and how it has had a transforming effect upon civilization. To be honest, however, there were large chunks of the book that weren’t terribly interesting, so I’d veer from jaw-aching boredom to total fascination. What I enjoyed the most were the snippets of specific cooking history – obviously – and the recipes utilizing salt as a preservative from ancient times. 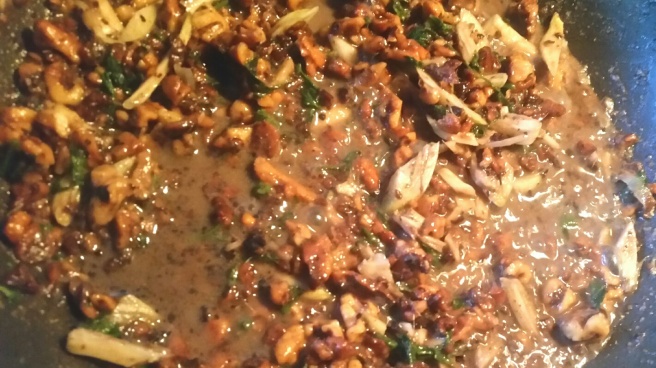 I am not normally a fan of non-fiction, and about the only non-fiction books I’ve read recently or blogged about are food memoirs. I read to escape our sometimes-mundane existence, so the last thing I want is to be bogged down in lengthy details of reality. This book, however, took me on a journey spanning the globe and timeline of the world, from ancient Rome, where Roman soldiers were actually paid in salt, hence the term “worth his salt” to modern-day Cajun country where shellfish are salted and preserved.

Salting has been in use as a food preservative since time immemorial, which if you think about it, has a direct effect upon health, winning battles, and otherwise having a culture and society survive and flourish. It is believed to keep evil spirits away, and has been used in medicine to draw moisture and infection out of wounds.

The science of salt is dull, but not being a scientist or a linear thinker, that’s just me. I find salt interesting insofar as it spices up food, acts as a cleaning agent for my cast iron pans, and I also use it sprinkled across all of my doors and windows in my home to keep out negative energy and evil. Laugh if you want, but for me, it works. 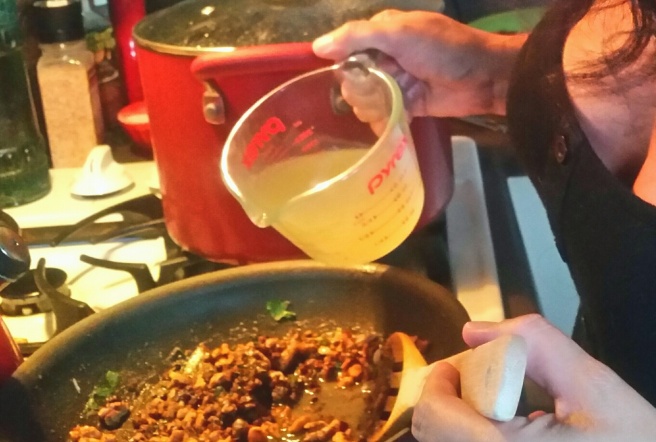 Some of the more fascinating tidbits I learned from this book include: the fact that Gandhi’s famous march against the British was in protest of salt restrictions; one of the reasons why George Washington fought against the British was against salt shortages; that flamingos get their brilliant pink hue from salt; that salt in the oceans is what keeps our fish alive; that anchovies are the basis for Worchestershire sauce; and that without salt, we wouldn’t have things like soy sauce, cheese, preserved anchovies or preserved walnuts. Which would seriously suck, because not only are cheese, walnuts and anchovies among my favorite foods ever, but they also make up the base of today’s gastro-porn recipe, based on these two passages from the book.

Since the time of ancient Greece, anchovies have been the most praised salted fish of the Mediterranean, and since the Middle Ages those of Colliore have been regarded as the best salted anchovies in the world.

Not having been raised to eat anchovies, I didn’t try them until adulthood when I first made pasta alla puttanesca. I was hooked on these little salty nuggets of flavor from that day on. And for all those people who freak out over anchovies in their food, calm the f*ck down already. You can’t even taste the fish, it just gives a lovely, salty flavor. So get out of your comfort zone and eat an anchovy! Or make this recipe.

METHOD
Boil your pasta water, salt it, and put in the pasta. Cook until al dente, roughly 7 minutes but try it first. Al dente texture varies depending on the type of pasta you use.

Chop the walnuts and toast them in a dry non-stick pan until they brown and you can smell their nutty scent. Set aside.

In the same pan, add olive oil and saute the garlic cloves for up to 10 minutes. 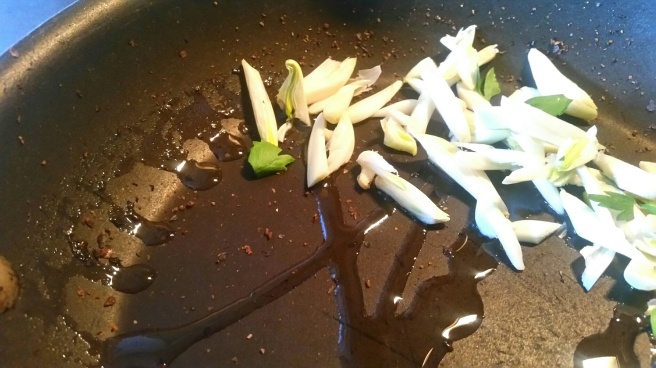 Chop the anchovies and add them to the garlic and oil. Cook on medium low until they begin to melt and break down. 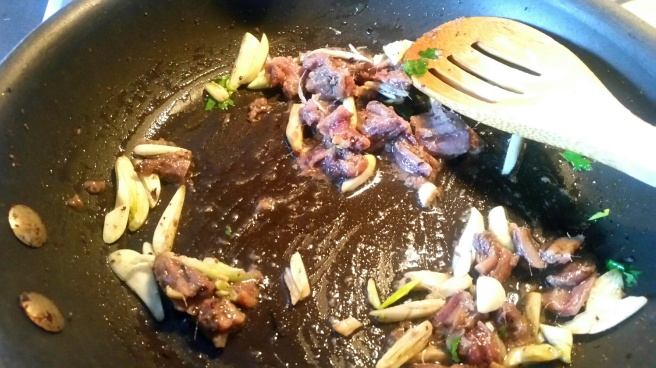 Drain the pasta and reserve one cupful of the cooking water. 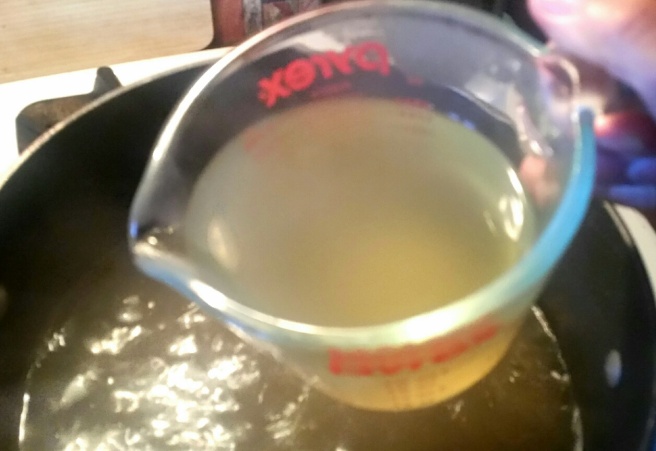 Add the cooled walnuts and some of the chopped parsley to the anchovies and garlic, and add in a bit of the pasta water, which helps the sauce thicken and amalgamate, due to the starches released during boiling.

Grate in the Pecorino Romano cheese, add in the lemon juice, stir, then take a tongful (yes, that’s a word, I just invented it) of pasta and add it to the sauce in the pan, doing that cool twirly motion that all the best Italian chefs make look so very easy. 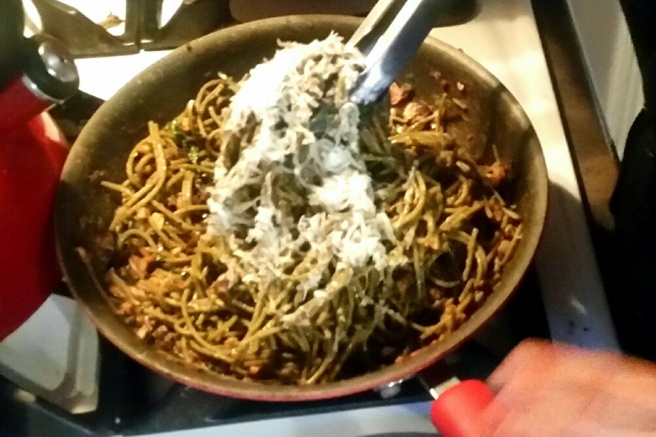 Cook another couple of minutes, just to make sure the cheese melts, then serve. WOW! The anchovy, lemon, parsley, walnuts and cheese are such an amazing combination. Please try this, if only to challenge your preconceived notions about anchovies. 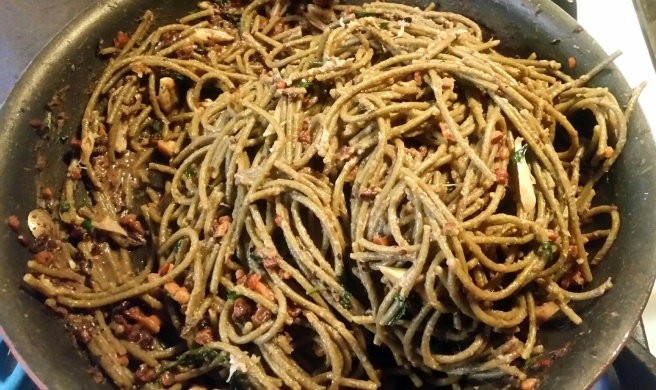