One of the reasons I started this blog, beyond the joy of combining my loves of reading and cooking, was also my desire to travel, whether physically or through the pages of books. I wanted to challenge myself as well, to cook food that was outside my comfort zone. 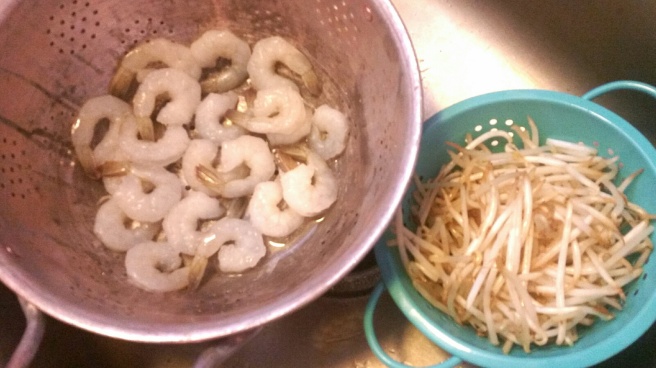 I’ve always wanted to gain a better understanding of both the history of China and its cuisine, however, and when one day I discovered this book The Ghost Bride, in the bargain bin at Bookworks, my favorite independent bookstore, and having no new books to read for a whole three days (a horror, let me tell you), I bought it, and proceeded to devour it in one sitting.

It’s a very unexpected book. The premise, a young lady named Li Lan of a once wealthy but now impoverished family in colonial Malacca, is asked by her father to become a “ghost bride” to a young man who has recently died. A ghost bride is a young lady who marries a man who has died, usually who was young and had never been married before death. The idea is that the spirit will be placated by being given a bride and will not haunt his family after death. Li Lan initially balks at the idea (as we all probably would), but then is invited to the home of the dead Lim Tian Ching, whose mother had the idea of marrying his spirit to the living Li Lan. That’s when things start getting interesting. 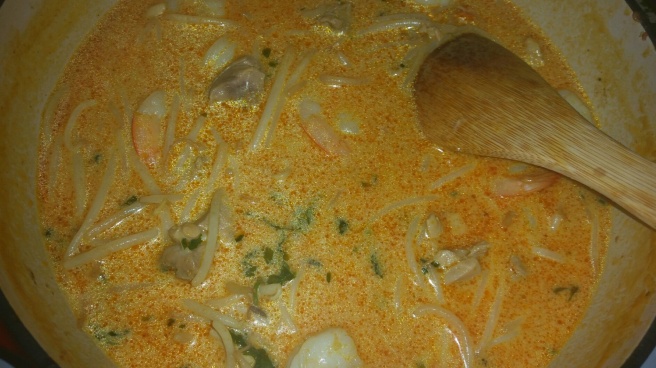 I consider this book to be educational as well as entertaining. I learned about Malacca and the Chinese population who lived there among numerous other ethnic and religious groups, a fascinating history of the Chinese culture and their diverse spiritual belief system, which also strongly influences their belief in the afterlife. Ghosts and spirits abound in this book, demons and the shades of people who have not passed yet into The Great Beyond, whether it be heaven or hell. The shadow world resembles the government of the time, structured, bureaucratic, with hierarchies of spirits and ghosts who build opulent houses and have their own caste system, just as the living do. Li Lan is unexpectedly cast into this shadow world when she tries to escape the spiritual advances of Lim Tian Ching, and finds herself on the adventure of a lifetime. 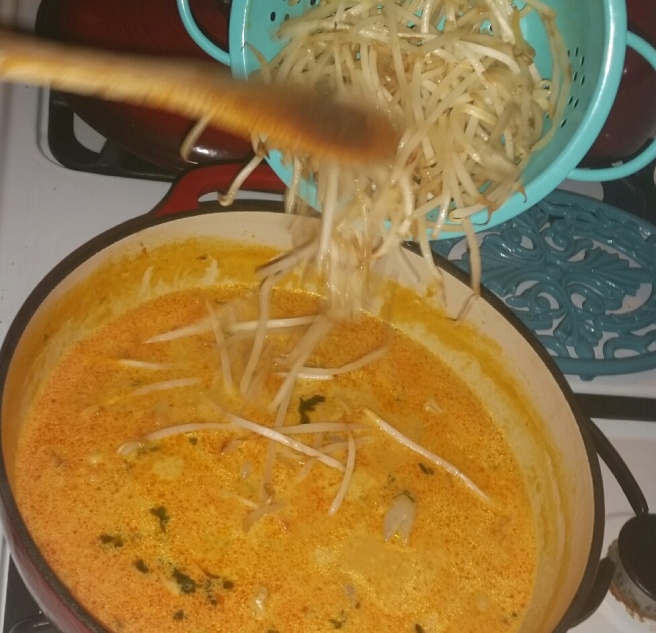 Speaking of food, in the spirit world of Malacca, spirits cannot eat until the living offer them food and a prayer in the living world. Li Lan is starving there, until her family’s cook, Wong, who has been able to see spirits since he was a child, takes pity on her and dedicates his bowl of laksa to her. Laksa, this delicious sounding dish, is a type of soup that has elements of curry, but is loaded with lots of other goodies so it makes a full and easy street food dish. So what the hell – pardon the pun – I made the laksa and some pineapple cupcakes. Pineapple tarts are mentioned as a nyonya – a dessert – but being unable to find several of the key ingredients for making Malaysian-style tarts, I made cupcakes instead, using the recipe from Baked By An Introvert, being a glutton for punishment by cooking and baking in this muggy summer heat. Oh well. Keeps me out of trouble. 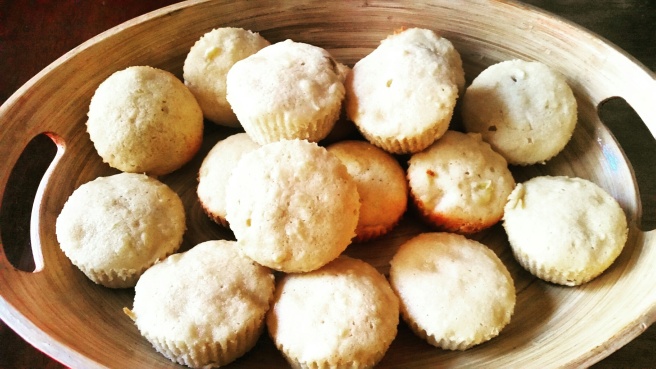 “Can I have noodles?” Old Wong looked indignant. “Don’t you know that they never wash the bowl and chopsticks but simply pass them along to the next customer? I can make you far better noodles than that.” “But I can’t go home right now.” “You want to get sick?” I couldn’t help smiling at the absurdity of this. “You don’t know……no noodles for you. Further on there’s a laksa stall. We’ll go there, not this kind of dirty place.” 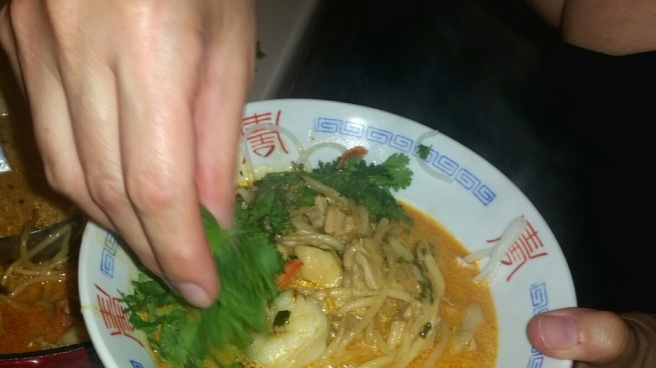 This is the method that worked for me, based on this terrific recipe from Feasting at Home, another excellent food blog. Along with tofu (which I loathe and despise), something called fish balls are traditionally added to the laksa, and as entertaining as the thought was to tell my friends that yes, the balls of a fish were part of this week’s blog, I decided against it. I’m nice like that. 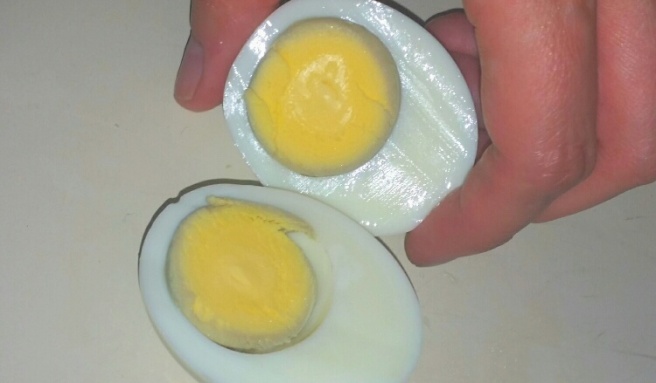 METHOD
Heat the laksa paste, the oil and the bouillon cube until the paste begins to soften. You’ll smell the chilies and the shrimp in the paste. Divine! 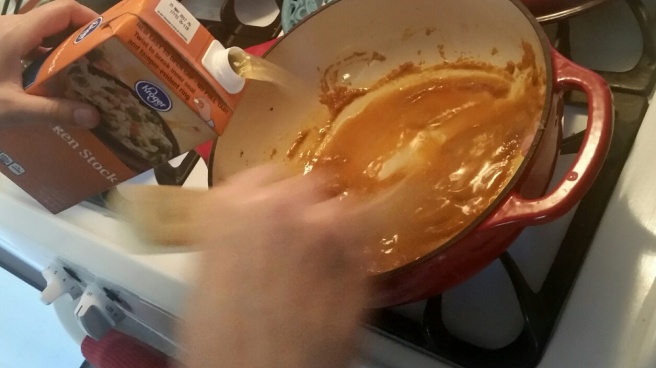 Add the chicken broth and the coconut milk and bring to a gentle simmer. Allow to cook for about 5 minutes, to allow the flavors to combine. 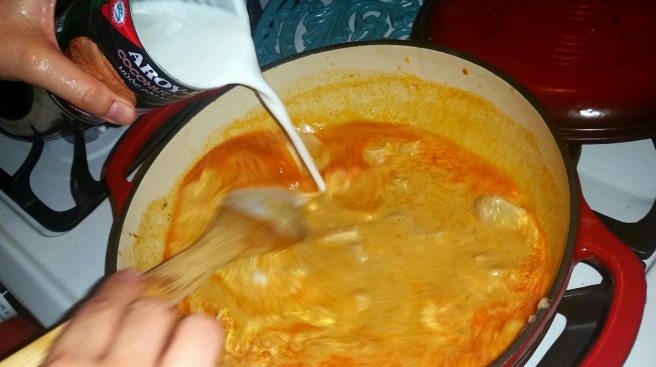 Add the cubed chicken thighs and cook for another 15-20 minutes, to ensure they are fully cooked through.

In another pot, bring lightly salted water to a boil. Add the rice noodles and allow to cook for 30 seconds or so. They won’t take long at all. Drain and set aside.

After 20 minutes of the chicken simmering, add a squeeze of lime juice to the laksa broth. Add the shrimp and cook for about 5 minutes, or until the shrimp are nice and pink. Don’t overcook, because the shrimp will be rubbery. Gross. 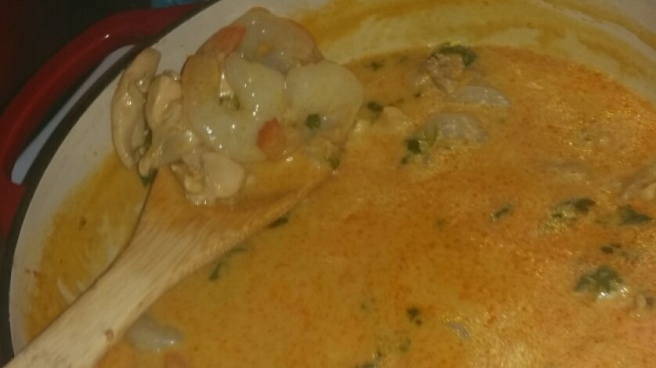 Ladle the broth and meat into bowls, add the rice noodles, and garnish each bowl with the cilantro, a handful of the bean sprouts, another squeeze of lime, the fried shallots, and half the hard boiled egg.

You can eat this in the traditional manner, slurping up noodles with chopsticks if you can manage them, and spooning up the broth. You see I have my chopsticks for the terminally incompetent here.

Delicious! It’s spicy, tart from the limes, pungent from the cilantro, and tastes of the sea with the laksa paste. So good, healthy and, even though it’s hot outside, it’s very refreshing to eat. This one’s a keeper.