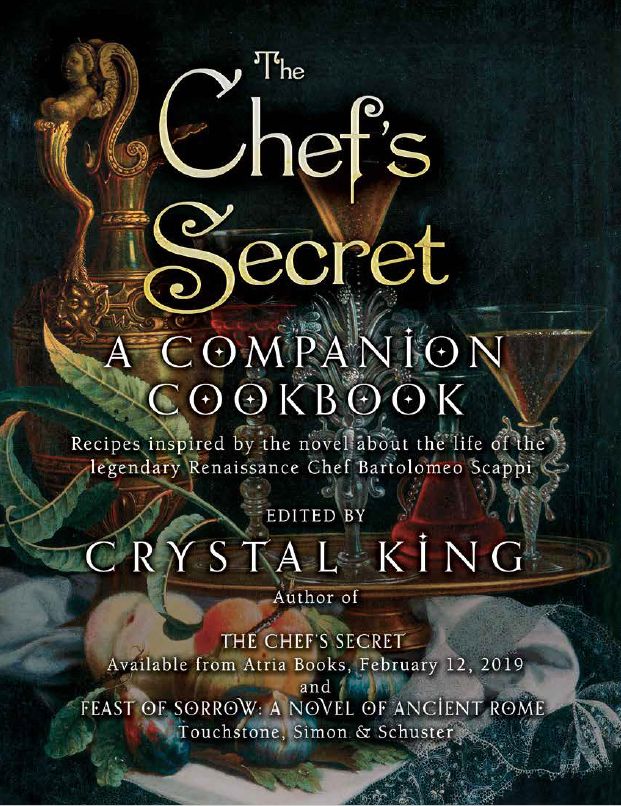 I am sooooo excited, thrilled and honored to have been part of this amazing book and cooking experience. Here is the link to the companion cookbook in Italian! My recipe is on page 7:
https://contenuti.edizpiemme.it/wp-content/uploads/2020/02/King-Lo-chef-segreto.pdf

Here is a link to the blog post I did for the book:
https://foodinbooks.com/2019/02/19/the-chefs-secret-by-crystal-king/

Historical fiction is probably my favorite genre in the world, and anything set in my spirit country of Italy even more so. This marvelous book, The Chef’s Secret, not only meets both of those criteria, but it’s also about FOOD! And FORBIDDEN LOVE! and MYSTERY! And MORE FOOD! OK, I’ll calm down now, but you see why I am so excited about it. Aside from the fact that the author, the wonderful Crystal King, asked me to be part of the book’s publication by submitting a recipe for the companion e-cookbook, this book itself is so beautifully written, so full of familial and romantic and culinary love, that I, too, fell in love with it.

Have you heard of Bartolomeo Scappi? Before Julia Child, before Jacques Pépin, before Emeril Lagasse and Nigella Lawson and Ina Garten and (my dearly departed future ex-husband) Anthony Bourdain, before the heyday of modern celebrity chefs, there was the immortal Scappi. He was personal chef to numerous cardinals and Pope Pius IV, was known to cook such exotic items as peacock, alligator and even fried chicken, and came to world fame when his meisterwork Opera dell’arte del cucinare was published in 1570. Though little is known about his personal life, this book tells the fictionalized account of his life in Renaissance Italy. And what a life it was!

Scappi has just died in the opening pages, and his nephew Giovanni is mourning him terribly. Giovanni is the son of Scappi’s sister, and has been apprenticed to learn everything there is to be learned from his culinary genius uncle, and in fact, Scappi leaves him the bulk of his fortune, estate, and his collection of recipes that are hotly pursued and contested by rival chefs of the time. Among the papers he leaves to Giovanni is one book he requests be destroyed without being read. Well, in what literary world do you think THAT is going to happen? Of course Giovanni reads it, finding that it is written in a secret code, and attempts to decipher the mystery at the heart of his uncle’s life – the identity of the woman for whom Scappi had a deep, beautiful, abiding and forbidden love, whom he called “Stella” to protect her identity, and that colors the rest of Scappi’s life, and affects Giovanni in unexpected ways. 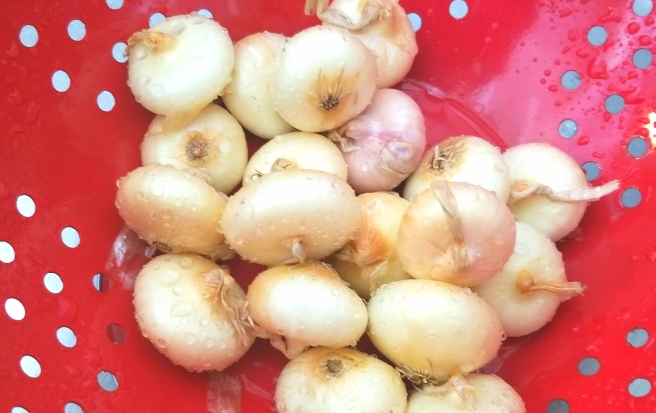 Of course, this book brims over with luscious food passages and descriptions of simple meals, feasts, instructions on various kitchen utensils and equipment, table setting suggestions, and my personal favorite – roses carved from radishes by Scappi to show his love for “Stella.” But my own inspiration for the recipe I am detailing below and that was part of the wonderful e-cookbook, actually came from the passage when Giovanni meets Doctor Boccia in the street after Scappi’s death, and Boccia affectionately calls him “polpetta,” his endearing nickname for Giovanni reminding them both how they met when Giovanni was a young chef’s apprentice making meatballs.

I was also incredibly touched, perhaps because I lost my mother to cancer during the time I was reading the book and developing this recipe, when I read the moving journal passage by Scappi’s affectionate family nickname for Giovanni – “little onion, cipollino.” Both affectionate names for Giovanni showed how loved he was by these figures in his life, which is the heart of the book after all.

In Italian, what I made could be called polpette di vitello con pinoli, e cipolla con una riduzione di aceto balsamico, which has a lovely and poetic ring to it, in my humble opinion. 🙂 With that in mind, let’s go make some meatballs and onions in a balsamic reduction!

Heat the oven to 400F. In a dry, hot pan, toast the pine nuts until they are golden brown and give off a nutty scent. Don’t let them burn. Remove from heat and allow to cool while you mix the other ingredients.

With your hands, mix together the beef and pork. Add in the garlic, the parsley and the sage, and mix again.

Add in the 1/4 cup of Asiago cheese and the cooled pine nuts. Season with salt and pepper.

Add the eggs, and mix together again with your hands.

Form small balls and lay them on a parchment-covered baking tray. Bake for 25 minutes.

Lower the oven temperature to 350F. Peel the onions, trim the stems, cut them in half, and rinse them. Pat dry.

Heat a cast iron pan over medium high heat and and add the butter, the onions and sprinkle over the rosemary. Cook for 5-7 minutes on the stove.

Transfer to the oven and bake for 35 minutes, until they brown and soften.

Pour balsamic vinegar into a metal saucepan, and add the crushed garlic clove.

Boil on medium for roughly 15-20 minutes, stirring occasionally. It will reduce to a thick, syrupy glaze. Don’t leave it because the sugars in the balsamic vinegar can burn.

Remove the garlic clove, and let cool slightly. Pour over the meatballs and cippoline onions. Eat immediately, with a glass of good red wine, and the spirit of Bartolomeo Scappi watching over you.

I’m back, and I greatly appreciate everyone’s patience and kind comments asking when I would get my ass back into the blogging world. Well, yesterday was the day. I’m officially moved into my gorgeous new house, which has the most beautiful kitchen, so Food in Books has returned.

Having lived in controlled chaos surrounded by boxes of packed-up books and kitchenware over the past month was a challenge, and I kept myself sane by picturing the first literary meal I would cook in my new kitchen. While at the library last week I discovered Feast of Sorrow: A Novel of Ancient Rome and of course, with a title like that, I had to read it.

It is the fictionalized story of Apicius, the earliest-known cookbook author. Apicius lived during the reign of Caesar Augustus and then Tiberius Caesar, and is known for writing what is known as De re coquinaria, the earliest collection of recipes known.  The historical detail is amazing, and the few known bits of information about the actual life of Apicius are woven seamlessly into the novel. Actual Roman condiments such as liquamen – a type of fish sauce – and silphium – a now-extinct type of fennel, and so many others – are demonstrated in the book recipes, which was very cool. Foodie nerd porn literature!

The final feast cooked by Apicius’s cook, a free slave named Thracius, is a magnificent masterpiece of all known cuisines of ancient Rome. There are peacocks roasted and re-dressed in their own feathers, flamingo steaks, stuffed and fried baby birds; and roasted asparagus in mustard sauce. As tempting as it was to try and go all-out Roman and recreate the feast, I didn’t. Flamingos aren’t in season, you realize.

Asparagus in mustard sauce seemed doable, especially in light of the fact that being in modern times, I didn’t have to hand-grind mustard seeds into a paste and season to create the condiment. I cooked the asparagus with roasted garlic lemon chicken, which went deliciously well with the tangy, roasted asparagus dish. The ancient Romans would be pleased, I think.

METHOD
Heat the oven to 375F. Snap off the woody ends of the asparagus and rinse well.

Roast for up to 30 minutes, until they get those nice brown, charred bits.

In a large measuring cup, mix together the red wine vinegar, mustard, mayonnaise, lemon juice, and salt and pepper. This is very much to taste, so adjust to your liking.

Drizzle the sauce over the roasted asparagus, serve with the chicken, and wolf down with the greed of an ancient Roman senator.

And last but not least, a huge thanks and shout-out to Jen at http://www.readrantrockandroll.com for nominating me for another blog award. Jen, who also goes by the very cool moniker of Mischenko (sounds like a sexy Russian spy, doesn’t it?) writes about music, movies, books, gaming and food, in addition to modern culture, so I highly recommend her blog. https://readrantrockandroll.com/2017/07/30/award-real-neat-blog-award-1-2/