Thanks to KMQ for the photography.

We continue with our month-long Halloween theme and a particular favorite book of mine. I’m always excited to reread “The Witching Hour” which is on my top 10 absolute most favorite books in the world.

I first discovered Anne Rice one summer when I was 12, visiting my aunt and uncle in Douglas, Arizona, a small town on the border of Mexico. I was wandering around the historic downtown area, happened upon the bookstore (of course) and while browsing, came across this luridly gold and red book cover titled “Interview with the Vampire.” I was hooked on this marvelous author from that day forward, and this one  remains high on my list of desert-island reads.

Anne Rice has a lush, prosaic style of writing. She’s a sensualist, as is obvious in her descriptions of light, darkness, death, blood, spirit encounters and lovemaking. All of these descriptions are sprinkled throughout The Witching Hour, but though she is very much a sensualist, I don’t get a sense that she’s a foodie sensualist. What food descriptions there are in her books are not very detailed or ornate, compared to her luxuriant descriptions of other things. It makes sense, of course, because many of her books center around vampires, and they only ingest blood. But her witches seem to be more focused on wealth and luxury and power……..and there’s nothing wrong with that, either! 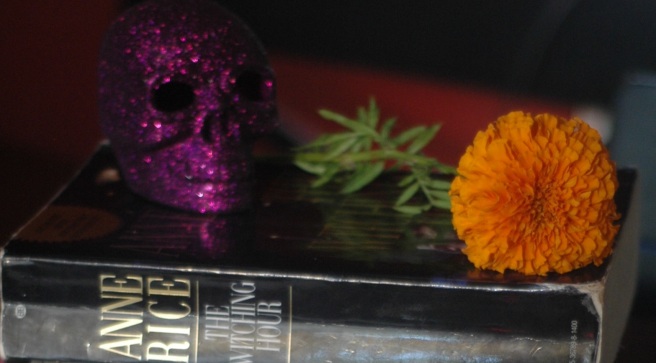 This is an epic book, telling the story of one New Orleans family, the Mayfairs, and its history going back 13 generations. Each generation has an heiress to the huge family fortune, and each of these women are witches. These women can control spirits, at times read people’s minds and otherwise interact with the spirit world, and in fact, each generation has been haunted by a spirit called Lasher, who has helped the family amass its immense wealth and yet has caused much harm and damage. 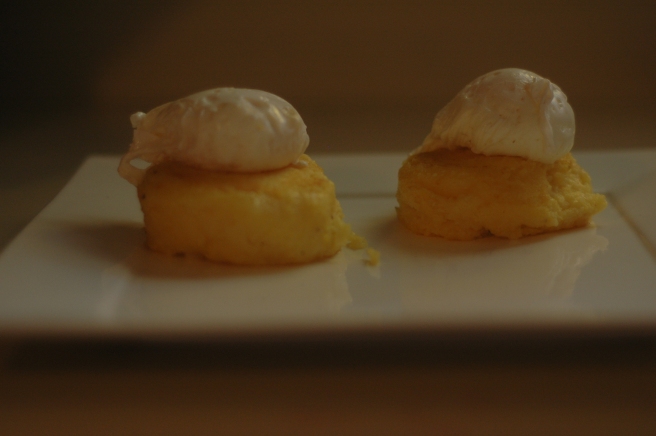 In one scene, he has come back to New Orleans and is reveling in his stay at the Pontchartrain Hotel on St. Charles Avenue, which he remembers visiting as a child. He and Rowan have cemented their physical relationship with a passionate night of lovemaking – always wonderful for working up an appetite! – and orders the ultimate Southern breakfast.

“He called Room Service. ‘Send me a big breakfast, Eggs Benedict, grits, yeah, a big bowl of grits, extra side of ham, toast, and a full pot of coffee. And tell the waiter to use his key.”

I tweaked Emeril Lagasse’s recipe for shrimp and grits, combined with a creamy sauce loosely based on this one at myrecipes.com, but with a few flavor tweaks of my own. I added the green bell pepper because it is a staple of Southern cooking, and a dash of turmeric in the grits to add to the lovely golden color.

METHOD
Add the sea salt to 5 cups of water. Cook at high heat and bring to a fierce boil.

Slowly pour in the cupful of grits, stirring to mix thoroughly. It will bubble up quite a bit so lower the heat immediately after pouring in the grits. Cover and cook for 10 minutes at very low heat. 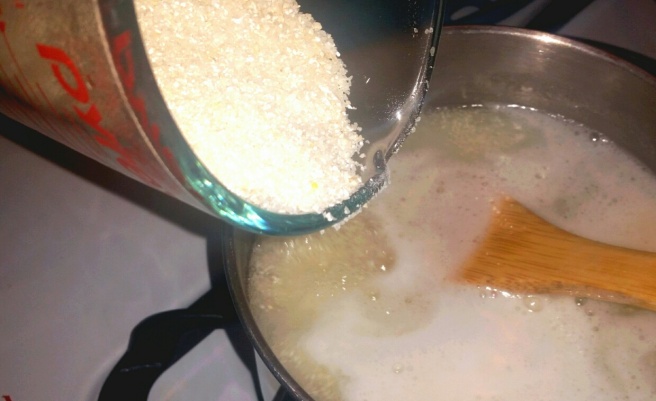 The grits will have thickened into a texture like porridge. It’s a good idea to whisk for a few minutes at this stage, since grits tend to be lumpy.

Add in the cheeses and stir to mix. 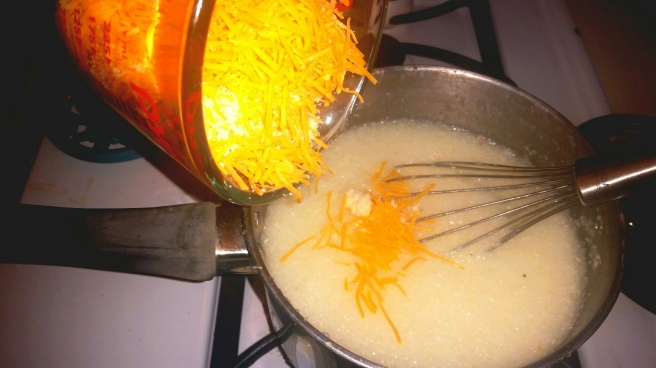 Taste for seasoning and add more salt and some pepper if so desired. Pour the cooked cheesy grits into a glass pan, and refrigerate for a few hours.

Saute the asparagus and green bell pepper together, with some butter, olive oil, salt and pepper for flavor. Add the shrimp to the cooked vegetables, and cook until the shrimp are pink. Remove immediately from the pan.

In the same pan, add the butter, flour, chicken broth, and half and half. Whisk together to make a thick cream. Taste for seasoning and flavor. Add the sherry, which will give the cream a nice, creamy, ecru color. 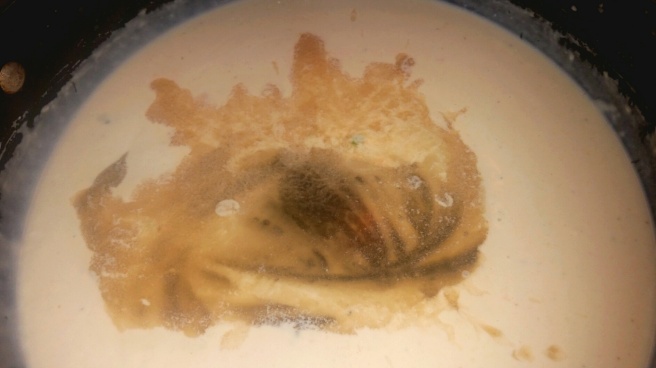 Add the cooked shrimp, asparagus and green pepper to the cream sauce, stir to combine the flavors, and cover to keep warm.

Take the chilled grits from the refrigerator. Cut circles out, using a small glass or coffee cup. It’s the same principle as making polenta, if you’ve made polenta, that is.

In the same pan you used for the cream sauce, cook the grits patties 3-4 minutes a side, until golden brown.

Put two grits patties on a plate, top each with a poached egg, and spoon over the lusciously flavored and scented cream sauce. 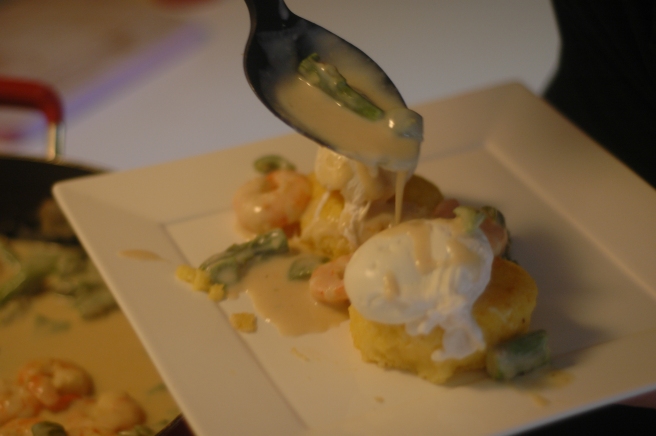 It’s a lovely dish, suitable for breakfast, lunch or dinner. I feel certain Anne Rice’s witches would not turn me into a frog if they tasted this dish made in their honor.

19 thoughts on “The Witching Hour by Anne Rice”