Ah Hamlet, the tragic and doomed Prince of Denmark, whose family puts the “fun” in dysfunctional. What I always liked about Hamlet is that his twisted family dynamic makes my own family look rather normal in comparison. Or maybe it goes to show that we all have messed-up family dynamics, and sometimes, as in Hamlet’s case, we can be one of the most messed-up members within it.

I read the play in its entirety in 11th grade Honors English class, and it also helped seeing movie versions and having those characters brought to life by various actors, but when I saw Kenneth Branagh’s opulent, glorious, 4-hour long movie, that was possibly when I fell in love with Hamlet and all his arrogant, sad, romantic pain.

He wants so much to do the right thing and avenge his father, and who can blame him?  What I could never understand was his turning on poor Ophelia. Talk about doomed love. That poor girl, all she wanted was to love him and help him and his perception of the world around him and his anger toward women – his mother particularly – twists his love for her and makes himreject her. And in her despair, she commits the ultimate act of pain and drowns herself.

His rage at his mother’s betrayal is the pivot point from which most of the major actions happen. Hamlet is so angry at her weakness and for marrying his uncle so quickly after the death of his father, and he scalds her with his words. The guy could cut with his tongue, that’s for certain, and when he uses the analogy of the food served at his father’s funeral as being part of the wedding feast, it’s the ultimate food play on words.

Thrift, thrift, Horatio! The funeral baked meats did coldly furnish forth the marriage tables. Would I had met my dearest foe in heaven or ever had I seen that day, Horatio! My father, methinks I see my father. 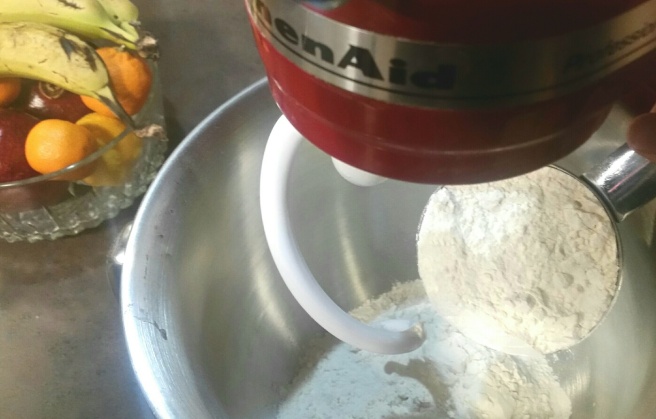 Baked meats were often encased in pastry, called coffins, in Elizabethan times, when The Bard wrote his masterpiece. In an upscale Elizabethan kitchen, many spices would be used to flavor the meats, including nutmeg, pepper, onion, ginger, cloves, cinnamon, and sugar. I opted to make baked chicken mini pies – baked chicken in a “coffin”, using a pastry method taken from Elizabethan times via Tori Avey’s awesome food site, and making filling spiced with paprika, a tiny hint of nutmeg and cinnamon, mushrooms, heavy cream, and a bit of Parmesan cheese, which I had lying around and needed to use. 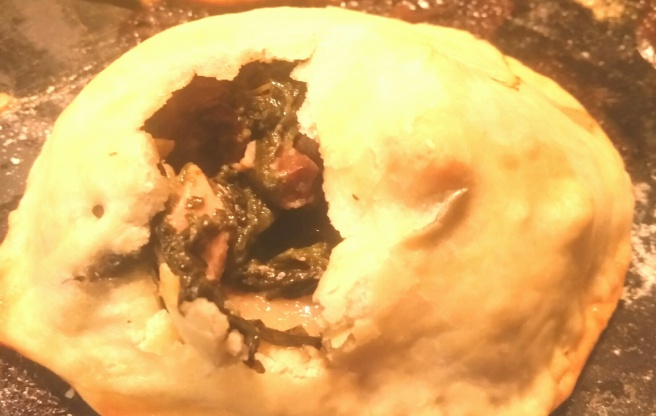 METHOD
Put the flour and salt into the bowl of your most awesome Kitchen Aid mixer, and gradually add the butter chunks. Mix using the pastry hook attachment at medium low speed.

Add the egg yolks and mix to incorporate. 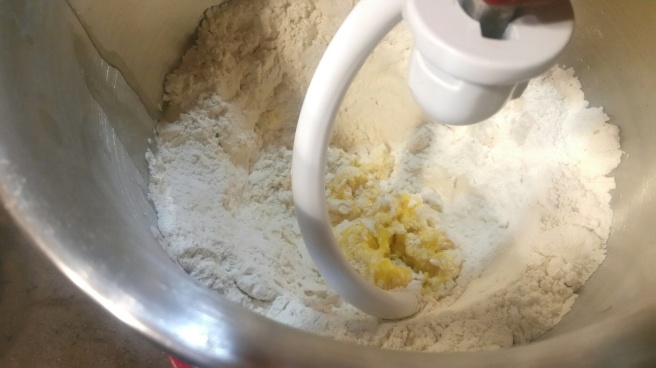 Keep mixing on low, and gradually add the water, until the mixture forms a ball of dough. Wrap in plastic, let rest for up to 30 minutes in the refrigerator. 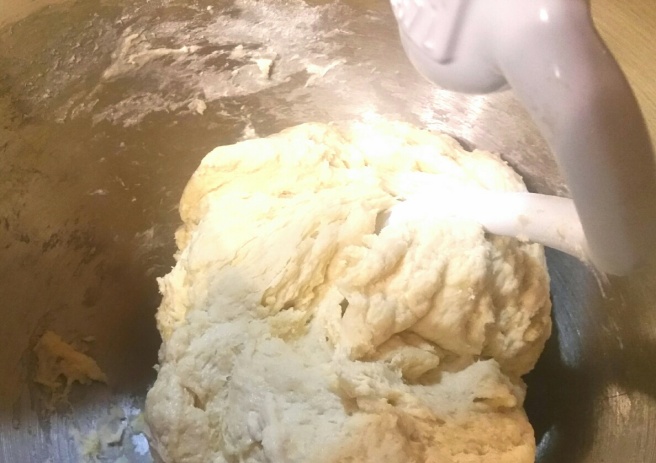 Heat the oven to 375F. While the dough rests, combine the spices with the cooked chicken, the mushrooms and spinach, and the heavy cream in a saucepan. Stir until well warmed through, taste for seasoning, and sprinkle in the Parmesan.

Divide the dough into 4 pieces, and roll each quarter out into sheets of roughly 1/2 inch thickness. Cut rounds using a biscuit cutter.

Fill each round with the chicken-spinach-mushroom mixture.

Rub some water around the dough edge, and press over another pastry round to form a little pie. Press the edges with a fork tine to seal, and brush with beaten egg mixed with a bit of water and some salt.

Bake for 50 minutes, or until golden brown and you can smell the spices and chicken. Very tasty, just as the Bard would have wanted.

11 thoughts on “The Tragedy of Hamlet, Prince of Denmark by William Shakespeare”