In honor of Easter Sunday, I decided to reacquaint myself with The Last Temptation of Christ, a book that has a very soft spot in my heart. This is the book and movie for which I was kicked out of Catholic school back in 9th grade. I didn’t get kicked out because I was a troublemaker or kissing boys behind the school or anything sinful that would warrant getting the boot from good old St. Michael’s High School. I got kicked out for asking questions. Let me explain.

The movie came out in the mid-1980s and caused a huge ruckus in the Catholic Church, the reason being is that the movie – and the book it was based on – showed a scene of Jesus having sex with Mary Magdalene. I will give you the context of that scene later in this blog, but oh the horror! My mom fell in with the ridiculous mob mentality of many parents back then and refused to allow my sister and I to see it. So of course, what does forbidding something from someone make them want to do? It makes them want to have it, of course.

Anyway, I spent the weekend with my Dad during all this brouhaha, and we went to rent movies at Blockbuster one evening. I saw a copy of The Last Temptation of Christ – VHS old school, no less! – and asked if I could rent it. Being that he was a teacher, he was never big on restricting knowledge and so he said yes, I could rent it but I had to watch it with him and he’d answer any questions I might have. Oh goody goody gumdrops, was my reaction. So I watched it and was enthralled with the vision of the human Jesus that I had never previously experienced. (Also, how freakin’ cool is it that David Bowie played Pontius Pilate!!!!)

I was raised Catholic, obviously, and the Jesus I learned about always knew he was the Son of God and what his ultimate fate would be, or at least, this was how it was presented to me. So to watch this movie, which showed Jesus as a man with doubts and fears and desires who was having visions of God and seeing and hearing things and thinking that he was going insane was a HUGE revelation to me. It’s hard to even put into words just how much of a revelation it was……literally life-changing because from that point on, my entire concept of Jesus and God and religion shifted and I wanted to know more.

So Monday rolled around and I happily trotted back to St. Mike’s with the scales having fallen from my eyes, as it were, and ended my school day with religion class. I sat down in Brother Ben’s class, we did the lesson and I naively raised my hand to ask a question that had occurred to me after having watched the film. My dad, bless his movie censor heart, had fallen asleep during the film so I couldn’t ask him. Anyway, I can’t remember the exact question, but it infuriated Brother Ben, who was this large, red-faced, beefy Irishman of a priest and his face turned the color of a tomato when I asked my question. He said, “Why are you asking that kind of question?!” in a very peeved tone of voice. I responded “Well, I saw this movie this weekend and it made me start thinking about this so I wanted to ask you.” He responded quite angrily, “What movie did you see?” and dummy me, not seeing the warning signs at the time, said innocently, “The Last Temptation of Christ.” Oh my Lord – pardon the pun – it was like throwing a match into a keg of gasoline. He exploded, shouting at me and questioning why my parents would allow me to watch such filth and that I had no business asking those kinds of questions, etc. etc. A few weeks later, at the end of the school year, my mom got a letter from the principal of St. Mike’s suggesting I would be happier in a “non-parochial environment.” I still laugh about it now. 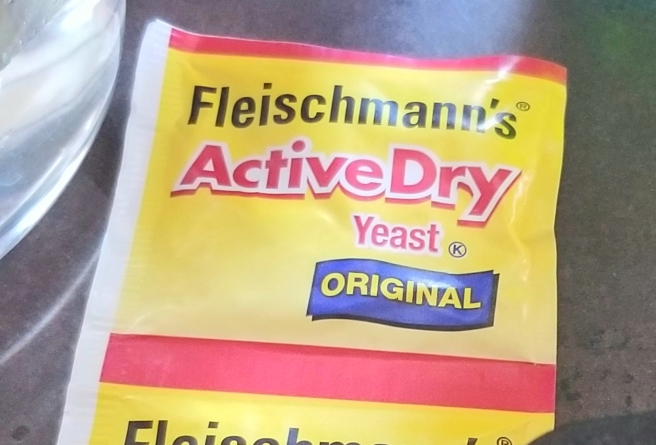 Anyway, the book tells the story of Jesus and his path to realizing he is the Son of God, his ministry, his temptations, and his crucifixion. But then from there, while he is slowly and agonizingly dying on the cross, it veers into a lengthy, intense vision of what his life would have been like if he had been different, lived as a a normal man. In this vision, he lives, marries the woman he loves Mary Magdalene (hence his vision of them making love and the furor that created in the Church because what a horrible thing for Jesus to imagine his destiny differently), has children and lives an otherwise unremarkable, normal, happy life. In  other words, the sex scene is all in his mind as part of his vision of giving up being the Son of God. If you were dying slowly and horrifically, wouldn’t you want to escape mentally and imagine you were somewhere else with someone you loved? I would, JC! You’re not alone!

The son of Mary felt calmed. He sat down on the root of the ancient olive tree and began to eat. How tasty this bread was, how refreshing the water, how sweet the two olives which the old lady gave him to accompany his bread. They had slender pits and were as fat and fleshy as apples! He chewed tranquilly and ate, feeling that his body and soul had joined and become one now, that they were receiving the bread, olives and water with one mouth, rejoicing, the both of them, and being nourished.

Isn’t that the most beautiful description of eating? I just love it. It inspired me to make olive bread, because bread is the most Biblical of foods and olives were common in Jesus’ time, and then of course, you have the whole Mount of Olives reference and so on. This is the method I used, based on a long-remembered recipe from a Mediterranean cookbook I used to have. Best part? No kneading involved.

METHOD
In a large mixing bowl, combine water and yeast.

Add one cup of flour and the sea salt, and stir until well mixed. 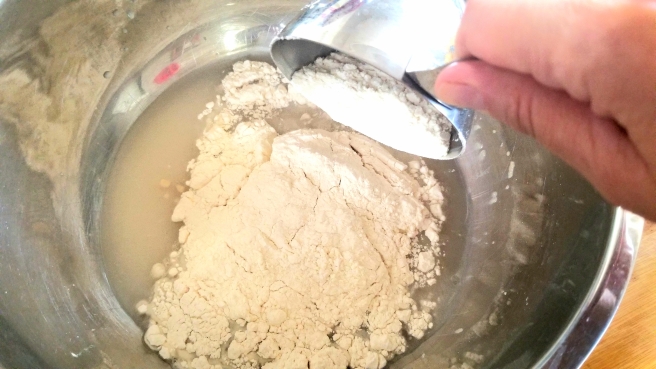 Add the sliced olives and the garlic powder. Mix again.

One cup at a time, stir in the remaining flour. You’ll notice the mixture getting thicker and shaggier with each cupful. This is normal. 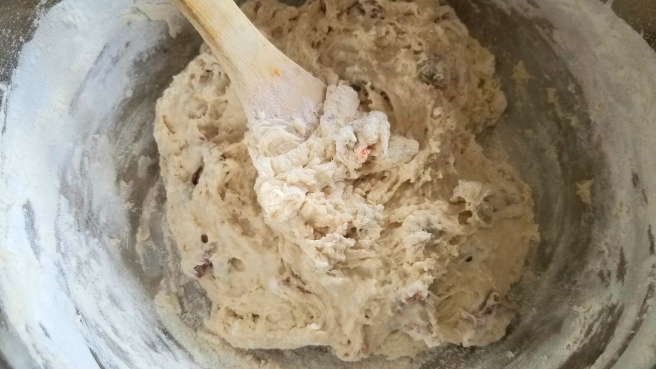 Cover with plastic wrap and a tea towel and set somewhere warm to rise for an hour. 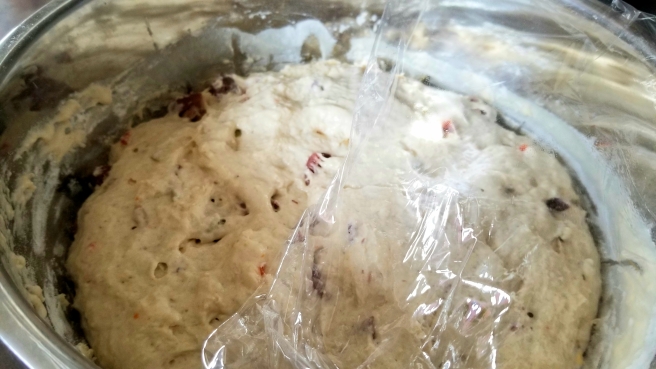 Add a tablespoon of olive oil in an 8-inch cast iron skillet and coat the bottom and sides of the skillet, then transfer the now-risen and very sticky dough to the oiled skillet. You may need to shape it a bit to make it the round size you want.

Cover with the tea towel and let it proof another half-hour, and heat the oven to 425F. 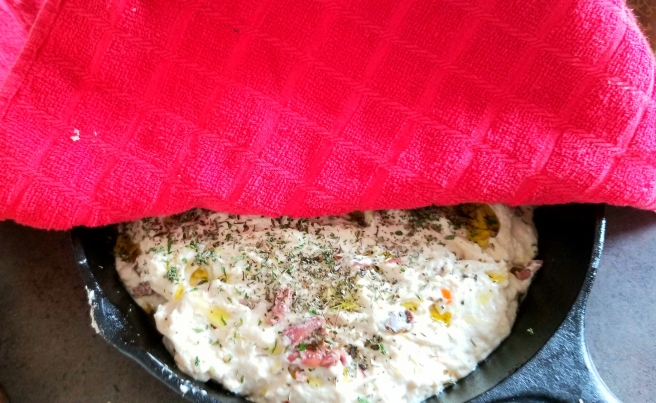 Drizzle about a tablespoon of olive oil on top of the dough, sprinkle with the dried herbs and maybe a bit of sea salt.

Bake for 30-35 minutes, until the top crust is nice and brown. Isn’t it beautiful? I was so proud!

Remove from the oven and let cool a few minutes before removing the bread from the skillet. Let cool a bit more, and serve with either butter or very good extra-virgin olive oil and a glass of red wine. Because it’s Easter. You gotta have the bread and wine to be saved.

27 thoughts on “The Last Temptation of Christ by Nikos Kazantzakis”