Special thanks to RP for the photography and kitchen assistance.

Having minored in art history in college, I always fall in love with books that tell stories about painters and their inspiration for famous works. I previously blogged about Girl with a Pearl Earring, which tells the story of Vermeer’s masterpiece. In The Last Painting of Sara de Vos, the painter herself is the enigma. Is the titular painting autobiographical? What is it supposed to mean? Most importantly, and a key element of this book, which of the two titular works is real? And if both of them exist and tell the same story and share the same heart, does it matter?

Told in three different timelines, it is the story of the painter Sara de Vos, and her “most famous” painting in 17th century Amsterdam during the famous tulip mania that gripped that country in the 1600s; Ellie the young forger who recreates it for reasons of her own in 1950s New York City; and Marty, the owner of the painting in modern-day New York City with his own complicated past.

Grief is the persistent thread running throughout this book. Sara de Vos mourns the loss of her young daughter and the abandonment by her husband; Ellie mourning lost opportunities and her own complicity in forgery; Marty mourning a lost wife, a life that never was, and punishment of the young Ellie’s transgression into his life and art. Sara’s grief is particularly poignant, though she is later hired in the household of Cornelis Groen and slowly begins to reclaim her life, her heart, and most importantly, her art, with the quiet courtship of Tomas, Cornelis’ manservant. 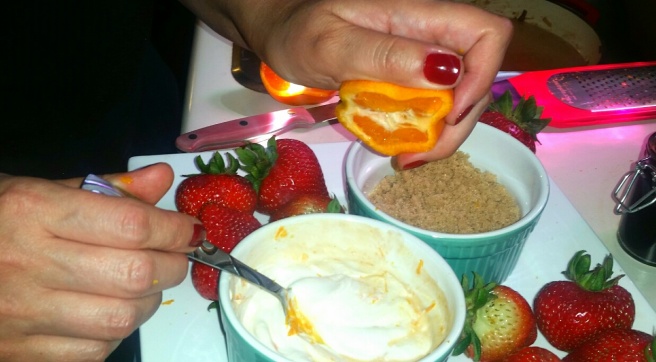 They head out of the grounds toward the back country in an open wagon, Tomas on the box seat and Cornelis and Sara in the rear………..also bundled along in the wicker baskets Mrs. Streek has prepared. Bread rolls, Leiden cheese studded with cumin seeds, strawberries with sour cream, marzipan, and wine spiced with cinnamon and cloves.

Strawberries and cheese have to be two of my most favorite foods in all the world. I’d never tried Leyden cheese but it sounded unusual, so found some on Amazon.com. Hurray Amazon Prime 2-day shipping! The idea of making a Dutch-style grilled cheese sandwich occurred to me, and pairing the cumin-seeded Leyden cheese with caramelized onions and tomato was a creative twist. And of course, strawberries in sour cream, with a touch of brown sugar, has to be one of the most heavenly things to eat on earth.

These are the methods that worked for me, based on childhood memories of strawberries and cream and sugar, and a lifelong love of grilled cheese. 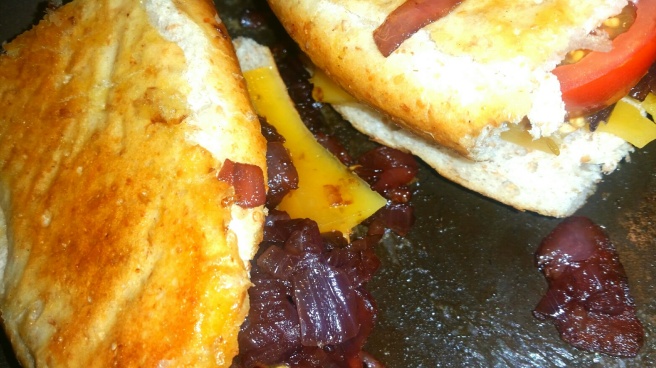 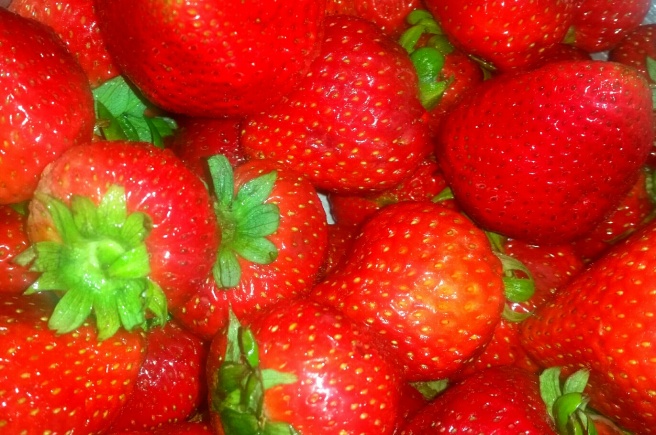 In a small bowl, mix the sour cream, the zest and juice of the clementine, the vanilla, and the almond extract. Taste for additional flavoring. In another small bowl, put the brown sugar and the cinnamon. 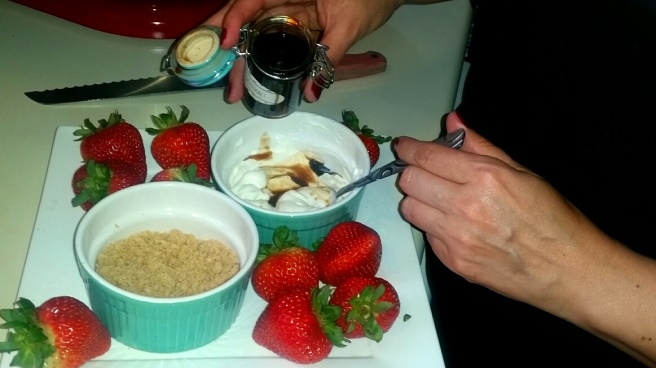 Dip the strawberries first in the sour cream mixture, then roll in the brown sugar and cinnamon.

Slice the cumin-studded Leyden cheese into thick slices. It was nice to have a strong pair of hands do this for me, as this cheese is quite thick and firm.

Add more butter to the skillet and melt it. Lay two bread halves in the hot, melted butter and layer the cheese slices generously on each piece of bread, to begin melting. 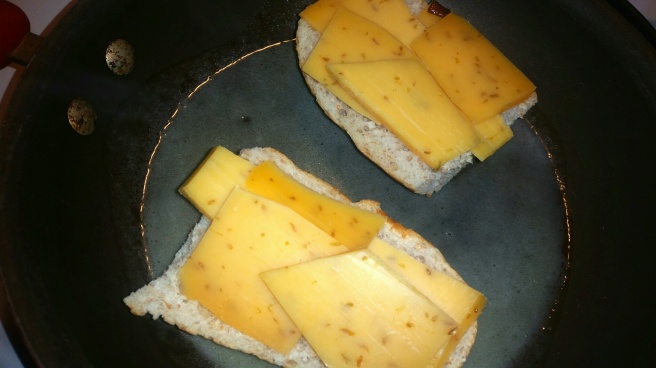 Lay the tomato slices and onion mixture generously on the other bread halves.

Lay the onion-tomato laden bread on top of the cheese-covered bread in the skillet. Cook over medium-low heat for about 10-12 minutes, flipping the sandwich occasionally so both sides cook evenly and don’t burn.

Serve on a platter with the strawberries, and admire your Dutch still life food work of art before devouring.