I don’t screw up in the kitchen much, so when I do, it’s usually in a spectacular fashion. Today was no different, and I think it must be the universe’s way of getting back at me for daring to read some total fluffy, smutty trash. But it’s set in Italy, I told myself as I opened the book and fell into the 1960’s world of Rome. Well, sometimes a girl just needs some smut in her life, and A Roman Tale delivers. But oh the kitchen fuck-up!

Anyway, this book combines lots of sex, the film industry, Italy, and some not-so-cleverly hidden allusions to famous actors and actresses into a – heh heh heh – fantastical roman á clef. Get it? A Roman Tale? Roman á clef? Oh, never mind me and my bad pun. Another punishment for screwing up so royally in the kitchen.

The main character, Madeline Mandell, who is supposed to be based both on the author and actress Carroll Baker and of course, the inimitable Marilyn Monroe, moves to 1960’s Rome – the “La Dolce Vita” years – after her Hollywood career tanks. She’s known as “Venus” due to her sexy image, though the reality is that she’s essentially frigid due to her jerk of a former husband. She hopes the move to Rome will both reignite her movie career and allow her all the sexual experimentation she missed out in in the United States.

She is befriended by three international actresses – Astrid, Helga, and Cleo (who are supposedly based on Ursula Andress, Anita Ekberg, and Sophia Loren), and starts an Italian film. She is introduced to the debonair Umberto Cassini, who of course she becomes infatuated with and he with her. The parallels to Fellini’s masterpiece La Dolce Vita (and one of my top 5 favorite films of all time) are unmissable.

But of course, nothing ever goes smoothly and the fly in the ointment is the British actress Serena Blair (likely based on Audrey Hepburn), who is pulling some machinations behind the scenes to get all four coveted roles in an upcoming major film, Boccaccio Volgare, that Madeline, Astrid, Helga, and Cleo are vying for. 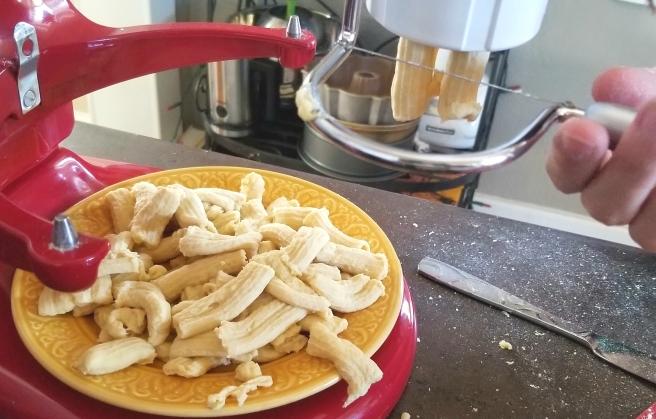 Rome, of course, is the star of the book and all the stunning landscapes of The Eternal City are described in mouthwatering detail…….La Bocca della Veritá, Piazza Navona, The Colosseum, the Spanish Steps, Fontana di Trevi, Palatine Hill, and so much more. I think I stuck with the book mainly for the location descriptions, though the sex and the food helped whet my appetite. For cooking, of course! 🙂

A subplot involves a young Italian starlet named Pina who seduces most of the men and infuriates most of the women at her extravagant wedding. Umberto squires Madeline and they share in the mammoth five-course feast, featuring several pastas and many other delectable-sounding dishes.

After the spaghetti alla primavera, there was tagliatelli with cream and peas, penne with cheese and asparagus, ravioli with cognac and truffles, and then the antipasto assortment. The main course was roast pork with kidneys, sausages, roast potatoes, and spinach puffs. 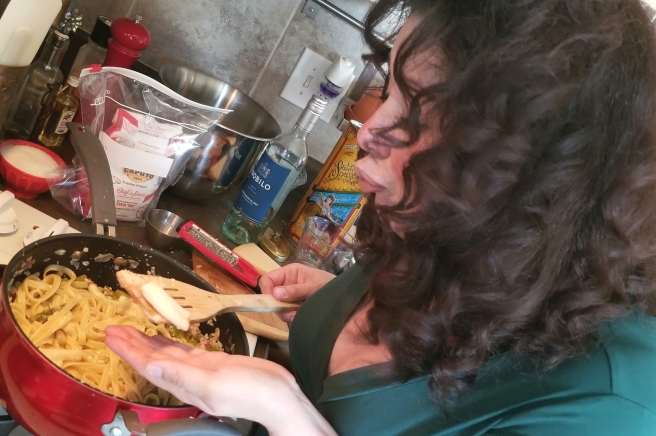 Having decided this was a great excuse to play with the pasta maker attachment for the Kitchen Aid and make fresh homemade pasta from scratch, I decided to recreate the penne with asparagus mentioned as part of the wedding feast. It did not come out well, as I will detail below. And for the record, do not ever let anyone tell you making homemade pasta is easy, at least the first time around. It isn’t. Wear an apron because if not, you’ll have flour all over you. ALL OVER YOU. Also, it’s way messy. Like, use every pan and stirring implement and utensil in the kitchen messy. (This is the aftermath of my kitchen post-making fresh pasta.) 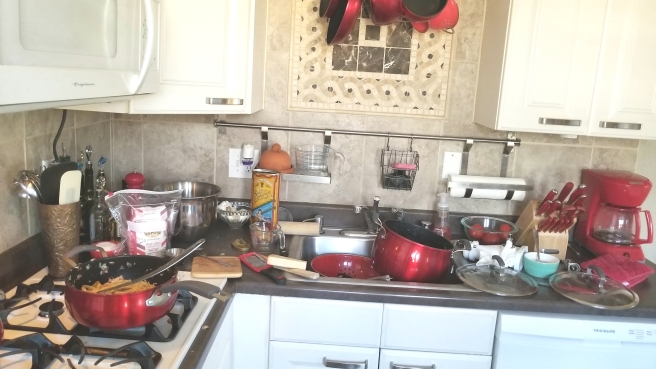 METHOD
Measure out the flour onto a flat surface, and make a well in it. 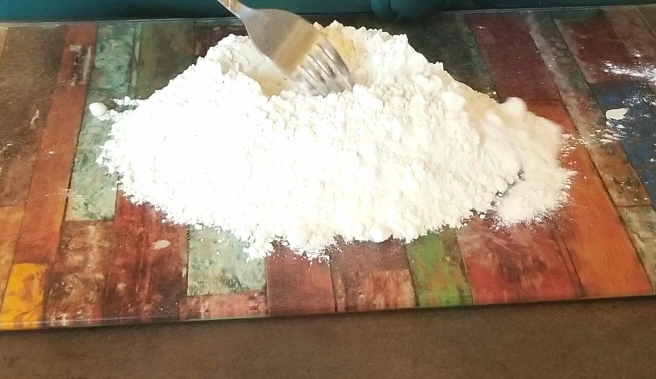 Crack in the eggs, and mix them into the flour using a fork.

Once the eggs are incorporated, start kneading by hand. You may have to add some warm water if your dough mixture is too dry and crumbly.

Roll and knead the dough until it coheres, then form it into a ball. Wrap in plastic and refrigerate for up to an hour, if not longer. 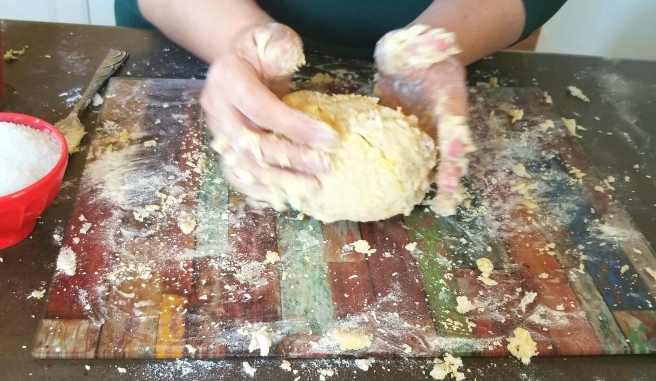 Put on a large pot of water to boil and add some sea salt. While the water is heating, chop the shallot and garlic and add to a pan with the olive oil and a sprinkle of sea salt.

Finely chop up the pancetta and add to the shallot and garlic, and fry until it starts to get crispy.

Pour in the heavy cream and the wine, and bring to a very low simmer, then toss in the asparagus chunks. 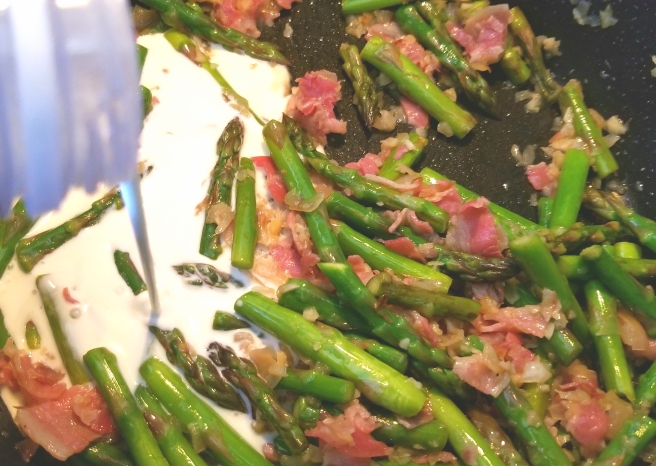 Cover and let cook slowly over low heat, and flour a flat surface. Unwrap the pasta dough and start rolling it out into a round disc shape.

When it’s about a half-inch thick in diameter, cut into pieces, roll into small balls, and start feeding them into your pasta machine.

I attempted penne. You can see that, in this case, concept far outweighed execution……other than my desire to execute myself over the travesty that was my homemade pasta. But at least my cute dog is in the pic, to distract you.

Put the freshly cut pasta into the boiling water on the stove and cook. In theory, the pasta should cook within a couple of minutes. In reality, my pasta cooked and cooked and cooked and softened after maybe 10 hard minutes of boiling. I still can’t figure out what I did wrong, but luckily I’m a seasoned kitchen hack so I had a packet of ready-made fettuccine on hand.

Add the fettuccine to the boiling water, and cook for 8 minutes until al dente. Add about half a cup of the pasta water to the asparagus sauce and let simmer a few more minutes. 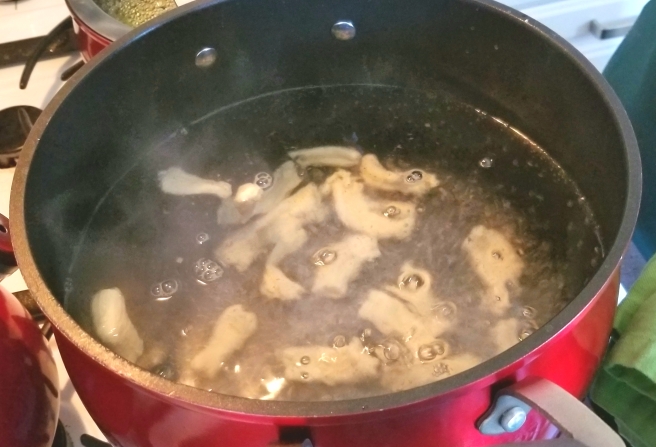 Grate over some fresh Parmesan cheese.

Plate and serve. So although my penne was somewhat of a disaster, it actually tasted quite nice. The texture was quite thick, so I think I probably should have rolled it out thinner or perhaps refrigerated it longer. Regardless, I served my sad penne with the perfectly cooked fettuccine, swirled in the pan of creamy asparagus and pancetta.

It might have looked somewhat frightful, but it actually was delicious. I just closed my eyes and pretended I was in Rome having smutty sex rather than eating what my friend Janet called “pasta and dumplings.” (sigh)

31 thoughts on “A Roman Tale by Carroll Baker”

Baking By The Books
Cocktails and Books