Thanks to CHC for the photography!

October winds to a close, and all the spooky, scary things that went bump in the night are on their way out, ushering in the holiday season. 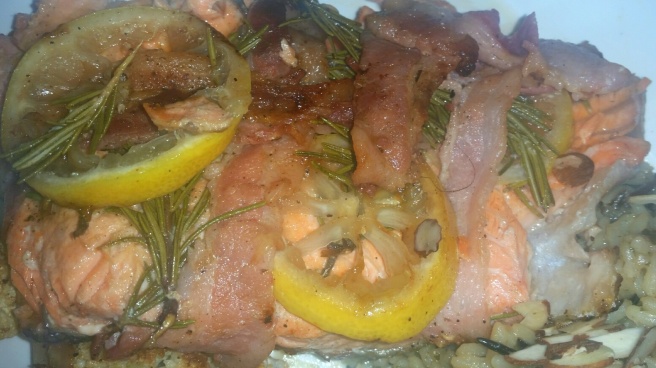 The supernaturally-themed book that I raced to the October finish line is a new favorite, a little gem of a novel which I’ve already read twice and thoroughly enjoyed. The Demonologist tells the story of a man’s desperate search to save his daughter from the clutches of a demon, or possibly The Devil himself. It’s written in sparse prose that make it all the more frightening to read, both from a psychological viewpoint and from the fear that it might all be true, after all. Hell and demons and all of it. 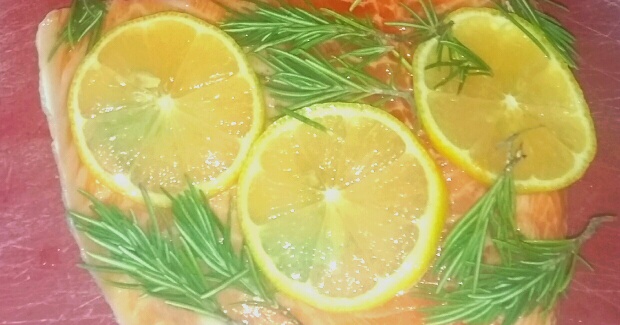 I don’t believe in demons, in the sense of little horned creatures running around, wreaking havoc with their pitchforks and offering people deals for their souls. I don’t believe in Hell, in the sense of a place where you burn over a spit for all eternity. What I do believe in is that demonic forces come from that dark, shadow place within all of us. Every light has a dark. There has to be an opposite – otherwise, how would we know what truly is, if there was nothing to compare it to? As far as Hell goes, I don’t think any literary or Biblical hell could match the hell of not being able to escape one’s own thoughts or deeds. I know from dark and painful personal experience that when your mind is in a loop of pain and anger and hurt and frustration and inability to do anything, that is hell right there.

In The Demonologist, you can feel the main character David’s anguish, his terror, his anger and his frustration from the start. Haunted persistently by what he deems depression since childhood, and what turns out to be far more scary than mere sadness, he is in the midst of a divorce when a mysterious woman supposedly employed by the Catholic Church arrives at his office one afternoon to offer him a trip to Venice to see something unusual. David is, you see, a professor and scholar of John Milton’s Paradise Lost, the epic poem about Lucifer’s fall from heaven that presents Hell and all the dominions and demons therein as fairly sympathetic characters. David takes his daughter Tess with him, and before the horror begins, they share a lovely meal overlooking the Venetian canals, in a restaurant very appropriately named for what’s to come.

“You know what they call this restaurant?” I say. “Il Settimo Cielo. Guess what it means.” “I don’t speak Italian, Dad.” “Seventh Heaven.” “Because it’s on the seventh floor?” “Give the girl a kewpie doll.” “What’s a kewpie doll?” “Never mind.” Lunch arrives. Grilled trout for me, spaghetti alla limone for Tess. We eat ravenously…….. 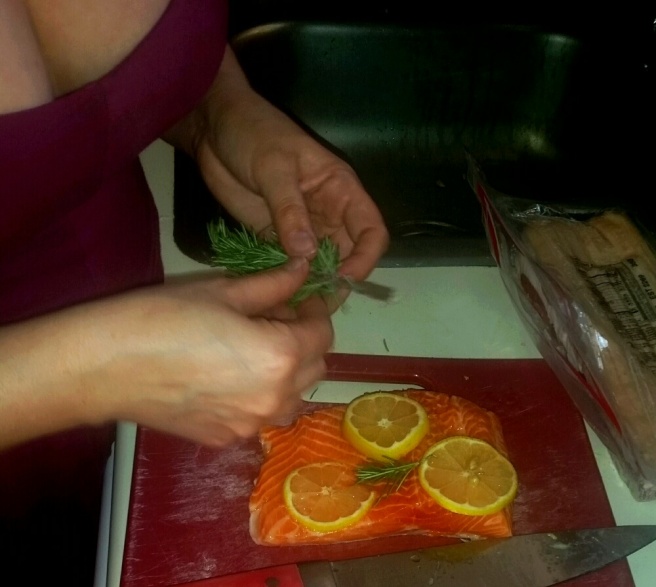 Having not eaten trout in years, because of lingering trauma from enforced camping and fishing as a child, and being forced to eat trout that still had those aggravating little bones in it  I was leery. But I discovered a recipe for bacon-wrapped grilled trout. Because what, I ask, does bacon NOT make better? This is the super-simple method that worked for me, based on my recent skill in grilling salmon stovetop, and this method from Epicurious.com.

INGREDIENTS
1 one-pound steelhead trout fillet, cleaned, deboned but with the skin on one side
1 lemon, thinly sliced
Handful of fresh rosemary
7-8 slices of thick-cut, smoked bacon
Olive oil
Salt and pepper, to taste

METHOD
Heat a stovetop grill to medium high. Make sure it is well oiled. Place the lemon slices on the top of each fish fillet.

Put 2-3 rosemary sprigs on top of each lemon-decorated fish piece.

Flatten your bacon slices with the flat of a knife, just to lengthen them a bit and help them cook faster.

Wrap 2-3 slices of bacon around each piece of lemon-rosemary garnished fish. 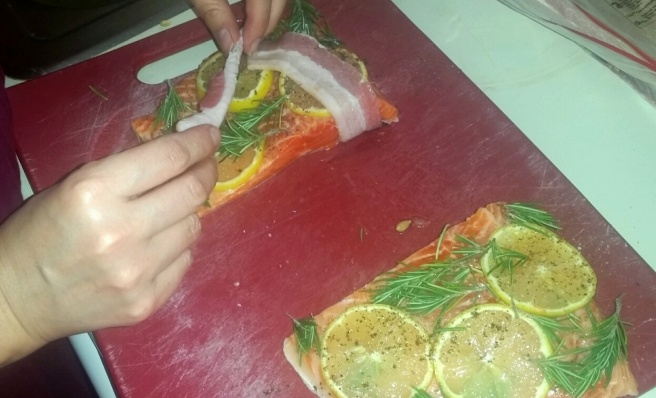 Grill each piece of fish turning frequently, so that the bacon crisps up, but the fish doesn’t burn. You will need to go by eye and nose. At one point, I covered the fish with foil and cooked for a good 10 minutes, just to steam. 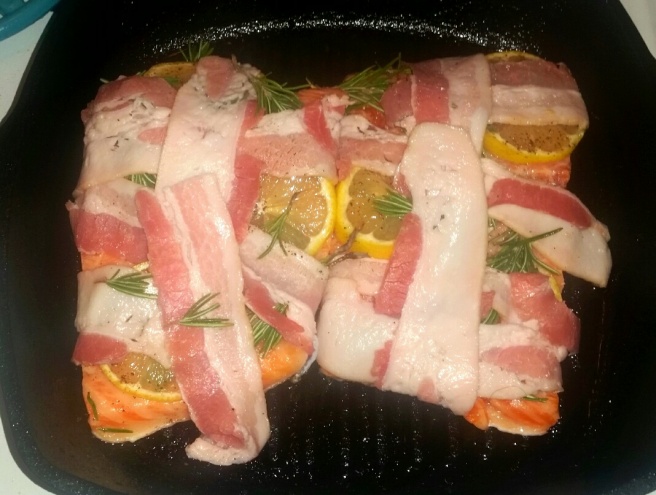 Plate and serve with some roasted lemon-garlic-Parmesan cauliflower, which you will have made earlier in the day, to save yourself hysterics from trying to roast and grill at the same time. Oh, the horror of it all! You can also add some wild rice with flaked almonds, which may soothe the wild beast in your heart.

The fish is delicious, tender and flaky with the added flavors of lemon and bacon and rosemary creating a savory, tasty, and harmonious dish, which may kick the demons and ghosts in the teeth. Here’s hoping.

Have a safe and fun and happy Halloween! 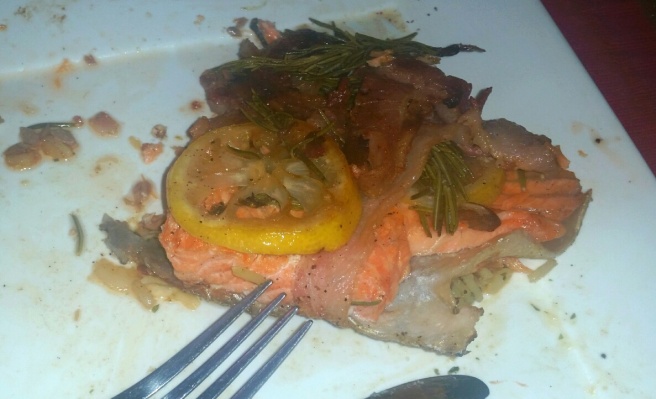 5 thoughts on “The Demonologist by Andrew Pyper”