No doubt many people saw the mediocre movie made from this book  Corelli’s Mandolin,  beautifully filmed but as usual, not nearly as compelling as the book, which is written in lively, colorful prose from the viewpoint of several unique characters. These unique individuals include the main female character Pellagia, a traditionally raised Greek daughter who dutifully cooks for her father and becomes engaged to the local stud but then flips convention on its head with her later choices; Dr. Iannis, her father, who has his head in the clouds, who cures wild animals as well as human beings and whose inner monologues kept me vastly amused and entertained; and of course, the titular character himself, Captain Antonio Corelli. It was a wonderful read, but also very depressing and sad…..kind of like life itself.  Set on the gorgeous island of Cephallonia during World War II, the heartbreak of war is brought vividly to life in this place that has remained timeless until now. I suppose it goes to show that the horror of war leaves no place and no one untouched. 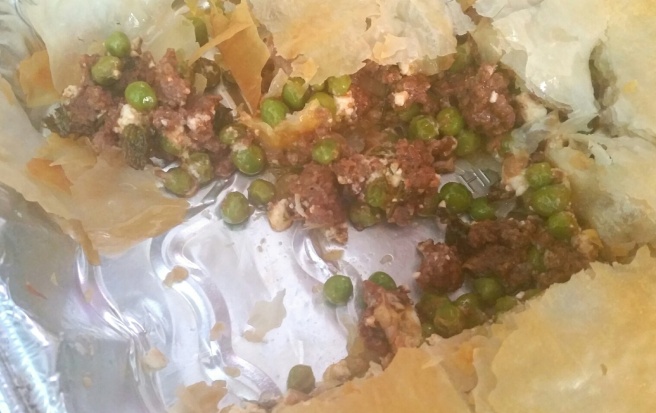 Being set in Greece, of course the food depictions are luscious, with descriptions of wonderful octopus, mezedakia, which are little finger-type foods served like appetizers, dolmades, spinach pies in miniature, and my favorite, the passage below, set during the feast of the local saint, St. Gerasimos. 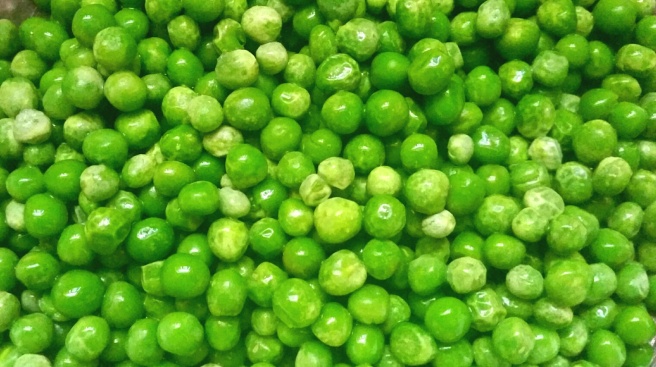 “Outside, the pilgrims unloaded animals laden with feta, melons, cooked fowl, and Cephallonian meat pie, shared it with their neighbours and composed epigrammatic couplets at each other’s expense.”

How can you not love a book that uses the word “epigrammatic” in the same sentence as such a delectable food passage? Anyhoo, kreatopita is the traditional meat pie eaten on Cephallonia, and can contain ground beef, feta cheese, onions, oregano and assorted other ingredients such as potatoes, rice, garlic, or tomatoes. The idea, I gather, is that each Greek cook has their own individual version of this recipe, and that is what true home cooking is all about. Having the skills to cook something and add tweaks or twists that make it truly your own, and which is part of the joy of this blog for me. It’s the ultimate in creativity, and I did it again here with the Cephallonian meat pie, using a base recipe from the marvelous blog site Lemon and Olives, with some added tweaks of my own. 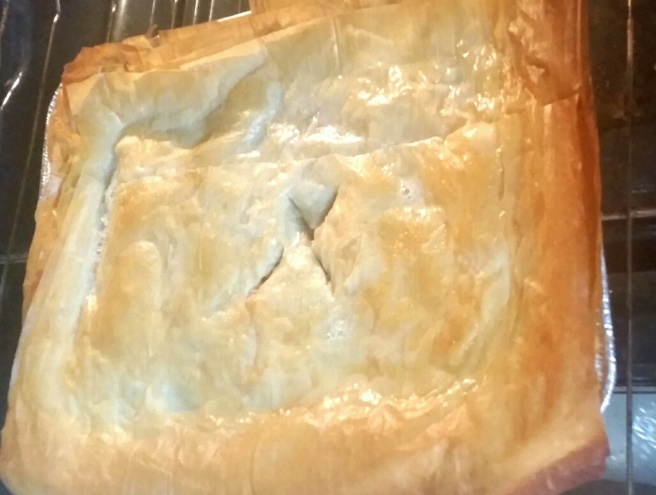 METHOD
Preheat the oven to 365F. In a skillet under a medium burner, add the olive oil and saute the onion and garlic for about 10 minutes, adding a bit of sea salt for flavoring and to keep the onion from burning. Add the ground beef to the onions and garlic in the pan, and brown for about 10-15 minutes, stirring to break up the meat.

Chop the equivalent of a 1/2 cup each of the fresh oregano, mint and dill. In another bowl, crumble up the feta cheese with your hands, and add the fresh herbs to this mixture. Fresh herbs really allow the flavors to come through, so if you use dried, use 1/2 tablespoon of each. Stir to mix and let the flavors mix together while you attend to the still-cooking meat.

Add the tomato paste and the wine and the beef and stir again. Lower the heat  to medium low and let the red wine reduce, stirring occasionally. Add in the peas and stir again, so that the heat of the skillet will help them defrost. The scent of the meat, the wine, the peas and the herbs will rise up and hit your nasal passages like a dream. Delicious!

You want the liquid reduced to nothing, so as not to make the phyllo dough soggy, so once the liquid is all gone, remove the meat mixture from the heat and let it cool for about 10-15 minutes. Once cooled, add the crumbled feta and herb mixture, mix well, and leave while you prepare the phyllo dough pie base.

In whatever type of baking pan you have – I used a buttered disposable baking pan – lay one sheet of phyllo dough and brush it with melted butter. Lay another sheet of phyllo and brush with butter again. Continue in this vein until you have 8-10 sheets of phyllo layered on top of each other, each layer covered with butter. You need to do this fairly quickly, as the phyllo dough dries out easily. If you cover the dough sheets with a damp towel, this should help, but don’t take too long at this stage.

On this buttery surface, add your meat-feta-pea mixture and spread everything out so that it evenly covers the dough. Add another sheet of phyllo dough on top of the meat mixture, brush with butter, and repeat until you have a topping of 8 more phyllo sheets to cover the meat.

Poke a few holes in the top of the dough and pop that bad boy into the oven to bake for 30 minutes, or until the crust is golden brown. You’ll be able to smell everything baking and your mouth will probably water so much that you’ll need a swig of wine to help. Remove from the oven, let cool slightly and eat with joy in your heart! Opa! 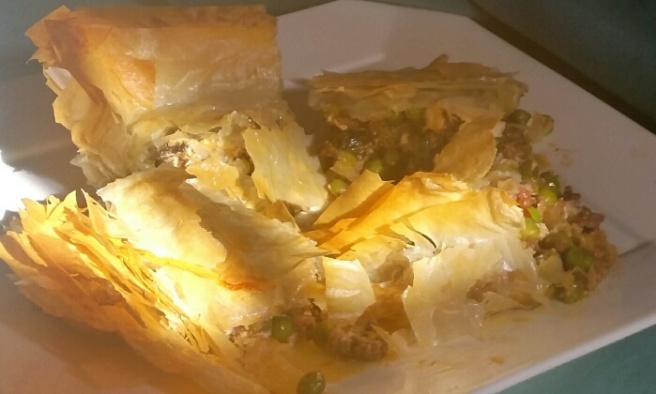