I decided to do a little something different for this blog post. Many people have suggested different recipes or dishes to me that they saw in a film version of a movie, and I loved the idea but wanted to stick with my original concept of creating food either directly mentioned in a book or inspired by a book. However, my dear friend Jade gave me some delicious fresh plums from her tree, and I happened to reorganize my DVD collection over the weekend and came across one of my most favorite films of all time, Amélie. Or as it is titled in French, “Le Fabuleux Destin d’Amélie Poulain.” 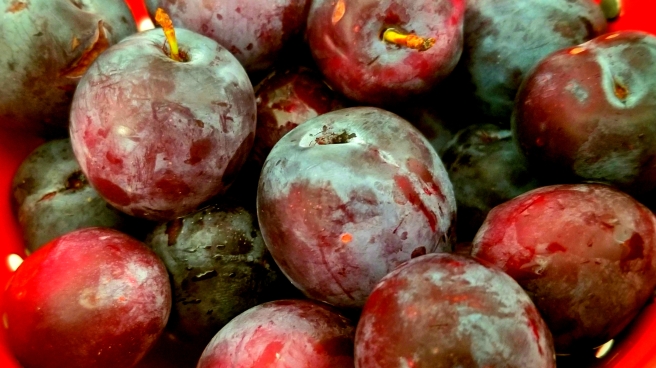 I love love love this movie beyond most any other film I’ve ever seen, and that’s saying a lot because I love films as much as I love books. Set in the beautiful Montmartre area of Paris, Amelie is a lovely young lady who has lived very much in her own little world since childhood, a world that started out with  teddy bear-shaped clouds, imaginary friends, and that childhood egomania where you believe that your actions affect things like world wars, sports outcomes, natural disasters, etc. This strange world was created as a result of being raised as an only child by two very neurotic parents, and this has essentially made her, even as an adult, stay enclosed and cocooned in this magical, if lonely, life she’s invented for herself.

A chance discovery of a child’s treasure hidden for years in her apartment that she is successfully able to return to its owner causes a chain reaction of events, both in the lives of those around her as well as herself. She starts doing small deeds of goodwill for other people but in some amazingly unusual ways, like taking a blind man through a visual tour of Montmartre, romantically connecting two regulars at the cafe where she is a waitress, putting together “fake” posthumous letters for the grieving widow whose husband abandoned her, taking her father’s garden gnome and having him send photos of himself traveling the world to inspire her widowed father to get out and experience the world, and my personal favorite, befriending her unusual neighbor who cannot leave his apartment due to a very odd medical condition that makes his bones so frail that the slightest bump will injure him.

Amelie is a very personal film for me, because I can so much relate to her character. I live very much in my own mind most of the time, and it can be hard to connect romantically, perhaps because I’ve been so hurt. I know we all have been hurt by love, and other people seem to have such an easy time reconnecting after relationship break-ups. Sometimes I feel like a freak because I’ve had such a hard time. It would be wonderful to meet someone and connect with them, but at the same time, I don’t want to be with someone just to be with someone. I want a special connection with someone, and if that’s not meant to be, that’s ok, but I also don’t want to settle for someone I don’t truly have special feelings for. As my Nana Jean used to say in Spanish “mejor sola que mala acompañada.” Better alone than in bad company.

I think Amélie is somewhat the same. She is such an unusual and unique creature that she needs to find someone as unusual and unique as she is. When she meets Nino Quicampoix……well, “meets” is maybe not the word for it. She sees him collecting torn-up photos from underneath photo booths in metro centers and finds this so oddly charming that she immediately concocts an entire story for his life and why he collects the photos. When she finds his scrapbook of all these photos put back together, she goes on a quest to find him and return it to him, wanting to meet him but at the same time so frightened to meet him in person and engage with him in real life that she creates these elaborate intersections where their paths cross but they never really connect due to her fear of him not liking her as she is. I can relate to that so very much that it’s almost frightening.

So there were two food’n’flix moments I thought of recreating. The first is early in the film when the narrator is talking about Amelie’s love of small pleasures, such as dipping her hand into a barrel of dried beans, finding shapes in clouds, and breaking a crème brûlée with a spoon (and which is a very underrated pleasure!) The other is at the end, when Nino comes to find her baking a plum cake in her apartment and imagining their life together. It’s such a sweetly beautiful moment when she finally lets him in and he kisses her, after all of her own self-doubts and fear of connection to another person. I opted to go with the plum cake due to having been given a large bag of them fresh from my friend Jade’s tree, and the fact that I don’t have a torch to make the requisite crust on a crème brûlée….and who the hell makes a crème brûlée without a crust you can break with a spoon? Not this girl! So a luscious plum cake, spiced with crushed cardamom and made tenderly delicious with some vanilla Greek yogurt was what it had to be. 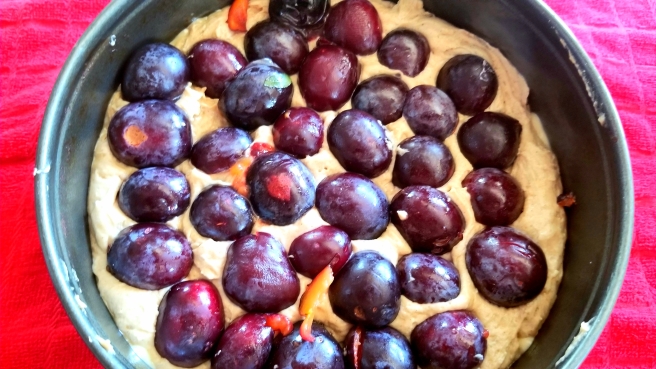 METHOD
Heat the oven to 375F and mix together the flour, baking powder, cinnamon, nutmeg, and salt in a bowl.

In the bowl of your most awesome red Kitchen Aid mixer, using the paddle attachment, cream together the butter and sugar  until fluffy.

Add the egg and vanilla and mix on low.

Gradually add in the flour mixture, mixing slowly, and alternate with a spoonful of the cardamom-spiked vanilla yogurt until all is smooth and combined. The batter will be thick, and that is what you want. 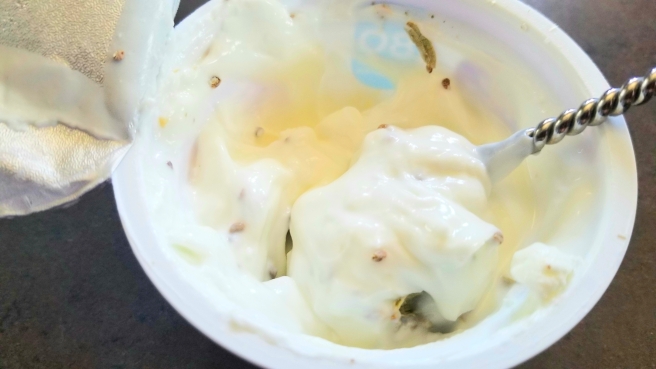 Butter a 9-inch springform baking pan and pour in the thick batter, smoothing with a spatula. 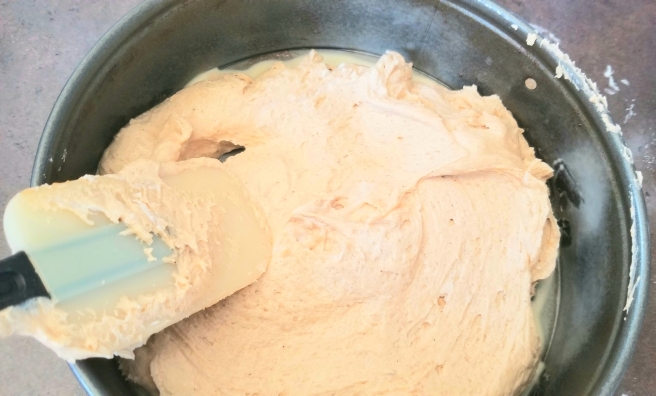 Arrange the sliced plums on top, skin-side up, in a circle so that they cover most of the batter, and sprinkle over the remaining two tablespoons of sugar.

Bake for 60 minutes, checking at the 45 minute mark, or until golden brown on top. Make sure the center has set and completely baked, then let cool, and serve with a dollop of whipped cream and a smidgen of whimsical romance. Vive la France!