This book was previously blogged about by a fellow food blogger, Cara Nicoletti, whose page Yummy Books was one of the inspirations for starting my own food and book blog. The Vacationers is about a family’s secrets and dysfunctions that come out over two weeks when they are vacationing in their house in Mallorca. I know, I know, it all sounds very dramatic and mysterious, but ultimately, it’s not.

Though I always try to give every book a fair shake, I have to say that this one was  boring. Franny and Jim, the two main characters/couple/parents, are celebrating their 35th anniversary during the vacation, their daughter Sylvia just finished high school and hates her family (wow, big surprise, a teenager hating her family), the token gay couple, and the son and his beautiful girlfriend that everyone hates. Pretty cardboard and standard characters – the wealthy family, the cheating husband, the unhappy wife planning to leave the marriage, the spoiled kids – to whom I had a very hard time finding any point of relating.

I did like Franny’s foodie-ness (yes, that’s a word, I just invented it) and her love of cooking to work out her irritations and frustrations through her culinary adventures. Kind of like me! It’s nicely written, don’t get me wrong. The descriptions of the beach, the ocean, the house, the food………all are beautiful and lyrical. But the characters really aren’t likable, other than Carmen (the girlfriend everyone loves to despise), and overall, it just didn’t grab me and stay with me, though this food passage made me start salivating a little bit.

Franny and the boys were making dinner – bacalao on toast, shrimp in a garlicky sauce, wilted greens. Tapas at home.

I didn’t have the wherewithal to soak bacalao for 24 hours before putting it onto toast, good as that sounded. However, some garlicky shrimp with tomatoes and wilted spinach  sounded very doable, simple, and tasty. I had a packet of tortellini that needed to be used, and so I combined them, thus evoking a summer’s evening overlooking the crashing ocean waves.

METHOD
Boil a large potful of water, add a generous handful of sea salt, and cook the tortellini for about 5-7 minutes. Test it to ensure it is al dente, and save a cupful of the cooking water.

In a large frying pan, heat the olive oil and gently cook the grape tomatoes, garlic and shallot for about 10 minutes.

Splash in the white wine, the lemon juice, and the red pepper flakes, and cook together another couple of minutes. Pour in a little bit of the pasta cooking water to help thicken the sauce and give some structure. 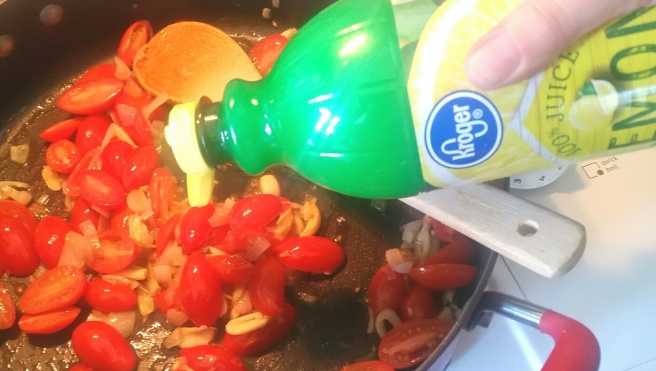 Add the spinach, stir, and cover again, cooking for about 10 minutes so that it wilts.

Add the shrimp to the mixture, cover and leave to cook for 5-10 minutes, checking frequently so the shrimp doesn’t overcook. When they are pink and plump, everything is ready.

Toss in the cooked tortellini, stir and cook another couple of minutes, so all the flavors are mixed and mingled. Then serve and eat with happiness. Delicious, just like a day at the beach!

4 thoughts on “The Vacationers by Emma Straub”

To all the meals I've cooked before

~Cooking & eBooks are two of my most favorite things! Here you’ll find recipes I love & I think you will too!

A blog about Horror fiction, Horror writing, and Horror criticism...a continuation of The Horror at Open Salon