I didn’t actually intend to blog this book, not that it wasn’t enjoyable but because I had actually forgotten I had it on my bookshelves. As fortune would have it, I found some late-summer squash blossoms at my nearby grower’s market yesterday morning, along with many other garden goodies. Anyway, back to the book. Set in Italy, obviously, The Tuscan Child is a pretty good read about a young woman named Joanna whose father Hugo has died and left her what’s left of his property and fortune in England. Arranging his funeral, she naturally has to go through letters and paperwork and discovers among his things a love letter from a woman named Sofia. Sofia, it turns out, rescued Hugo during WWII, when his fighter plane was shot down over her Tuscan village of San Salvatore, and of course, they fall in love. But of course, true love never runs smoothly, particularly during a world war when the country you’ve been trapped in is invaded by disgusting Nazis.

The book is told from two viewpoints and in two points in history. Joanna and her journey from England to Italy to learn more about Sofia and the Tuscan child she mentions in her letter, wanting to find out if this woman and her father had a baby together. Hugo’s story details his plane crash, how he and Sofia fall in love, and the occupation of Italy during WWII, which was fascinating to me. I never realized that Italy actually turned on Germany and surrendered to the Allied Forces, but the fact that the Nazi army was still actually physically in Italy made it much more difficult to fight them, since the Nazis were particularly nasty after their one-time partners turned against them.

Hugo is part of the Allied effort to fully get the Nazis out of Italy when his plane is shot down. He hides in an old, abandoned church and is found by Sofia, who has struggles of her own in the village. Her husband is gone, feared dead and later in the book, she is accused of collaborating with the Nazis. And poor Joanna is kind of an annoying character, initially whiny and passive and self-pitying. It’s not until she goes to Italy to find Hugo and Sofia’s “Tuscan child” that she starts taking initiative, seeing the bigger picture, and essentially growing up.  She stays in San Salvatore with a wonderful woman named Paola, her daughter Angelina, and Angelina’s newborn daughter. Probably the best parts of this book were the cooking passages. Of course, being in Tuscany, there has to be food and food galore is part of this book. Paola cooks homemade pasta, brodo with tomatoes and stale bread, artichokes, asparagus, and the thing that made me get this book out and reread it for today’s post – the stuffed squash blossoms.

“Let’s get on with the meal, Mamma. I am hungry and I am sure Signorina Joanna is, too.” “Then lay the table and slice the bread,” Paola said, going ahead of us into the cool kitchen. “And put out the salami and the cheese and wash those radishes.” She turned to me. “Now pay attention if you want to see how we stuff the zucchini blossoms.” She put some of the white cheese into a bowl, chopped up and added some of the herb I had now decided was mint, then grated some lemon zest on it. Then she took a spoon and carefully stuffed this mixture into each of the blossoms.

I’d had them when I visited Italy a few years ago and they were divine, lightly coated with a lemony batter and stuffed with creamy, herbed cheese so I decided that, having found these beautiful yellow flowers, I was going to make them. So I did. 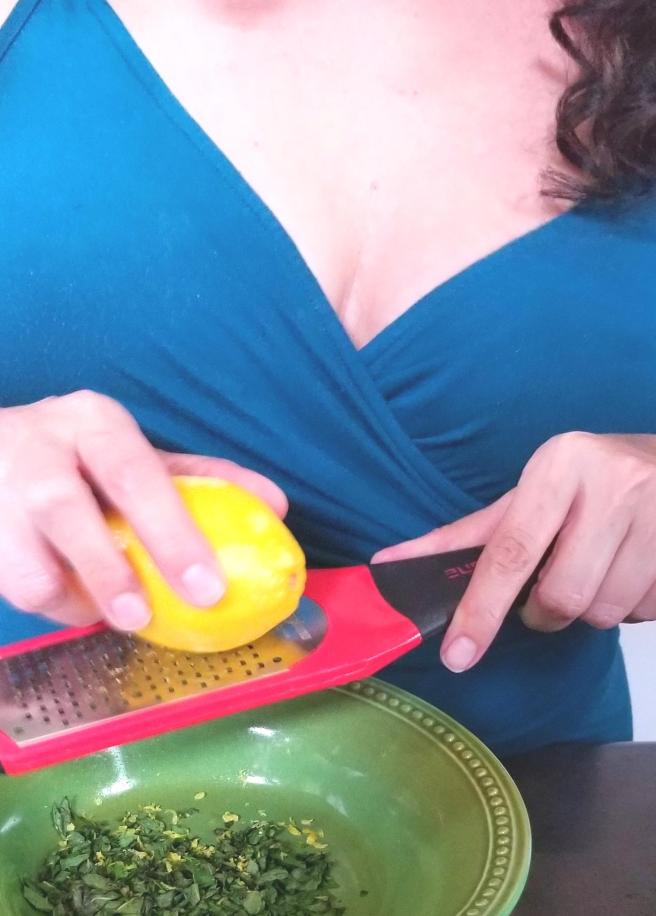 METHOD
Heat the olive oil in a cast-iron skillet until shimmering.

Finely chop the mint. I got to bust out the mezzaluna for this so I was happy.

Mix the mint with the Ricotta cheese and zest the lemon into this mixture. Taste for seasoning and add salt or pepper as needed.

Gently open the squash blossoms and stuff each cavity with the lemony, minty cheese mixture. The smell is awesome, with the cool mint offset by the sharp lemon.

Don’t overfill them or they won’t close. Seal them by twisting together the head petals. Set aside. 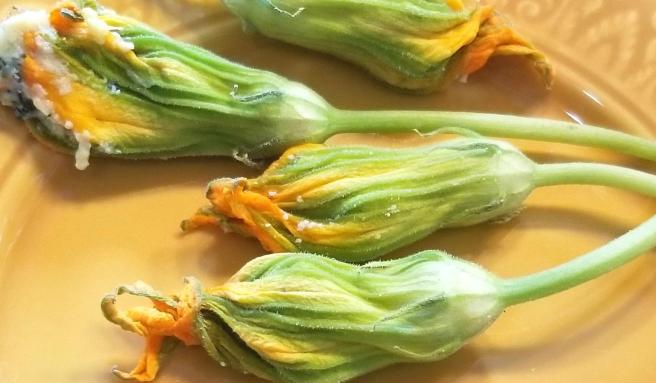 Prepare the batter by adding the salt and pepper to the flour, mixing together, and slowly pouring in the limonata. Stir to mix until you have a relatively thick batter for coating the flowers. 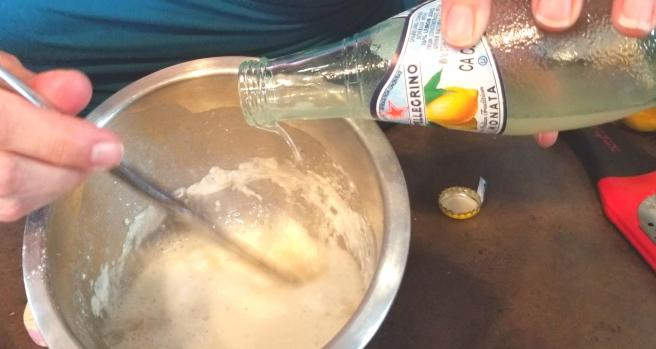 Dip each stuffed blossom into the batter, shake off the excess, and fry for about 2 minutes per side, until golden brown.

And if you have any batter left, throw in some shaved Parmesan and make cheesy fritters. They were an excellent accompaniment to these gorgeous squash blossoms.

22 thoughts on “The Tuscan Child by Rhys Bowen”

A blog about Horror fiction, Horror writing, and Horror criticism...a continuation of The Horror at Open Salon