One of the books I’d want to have with me if stranded on a desert island, this noir-style novel has everything you could want in an adventure story. The Shadow of the Wind is set in post-WWII Barcelona, and has tongue-in-cheek melodrama, mystery, forbidden love, a spooky mansion, hints of the supernatural, a strange, scarred stalker in black who haunts the steps of the main character and narrator Daniel, and best of all, a huge Cemetery of Forgotten Books.

As much a love story about books as it is anything else – with lines such as “Few things leave a deeper mark on a reader than the first book that finds its way into his heart,” this book will sing to anyone who adores reading and escapes into literary worlds on a regular basis.

The book’s premise is simple, but it blossoms like a gorgeous black flower into an epic tale. Daniel, who grows up as the book progresses, has lost his mother during the Spanish Civil War. His father, attempting to comfort him one morning, takes him to an old castle, inside which is a huge, twisting, high-ceilinged labyrinth of a library, along the vast, amazing lines of Jorge Luis Borges and Umberto Eco. 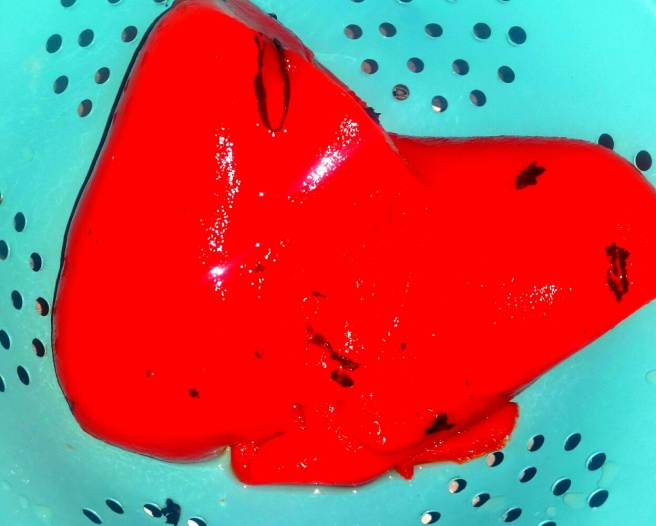 Here, the Cemetery of Forgotten Books, watched over by the gargoyle-ish Isaac,  holds books that have been loved, lost, sometimes damaged, occasionally destroyed, but always housed to maintain their spirit. Daniel finds a book called The Shadow of the Wind by the elusive Julián Caráx, and falls in love with it. He begins to search for more books by the author, and instead, finds himself at the heart of a mystery that started 20 years before.

Daniel is joined in unraveling the mystery of Julián by his unexpected friendship with Fermín Romero de Torres, a formerly homeless jester of a man who becomes Daniel’s best friend and co-conspirator, all while chatting up every woman in Barcelona and eating everything he can get his skinny hands on, along the way. He is hilarious, and the comic relief in what can be a very somber and dark, though enchantingly beautiful, tale. 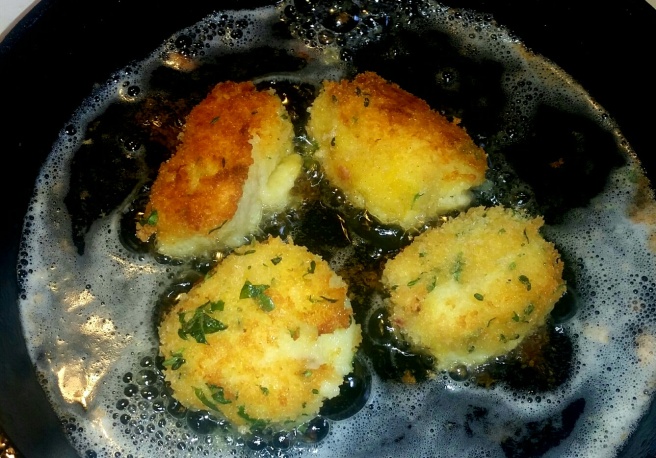 Fermín breathed deeply, with relief, and I knew I wasn’t the only one to be rejoicing at having left that place behind…………”Listen, Daniel. What would you say to some ham croquettes and a couple of glasses of sparkling wine here in the Xampañet, just to take away the bad taste left in our mouths?”

I remember having croquetas de jamón – ham croquettes – when I lived in Spain. They were always delicious with a glass of wine after class, and were among my favorite of all the tapas that I got to eat while there. Of course, anything eaten in a bar with a glass of wine at hand is always good, particularly when you’re actually ditching class to enjoy said treats. I digress, but goodness, those ham croquettes, sometimes made with Manchego cheese, sometimes with caperberries on the side, were just so delicious! I’m salivating in memory as I type.

This is the method that worked for me, based on what I remember of how croquetas were made when in Spain, and a few tricks from the great Martha Stewart herself (no ankle monitor jokes, please). I paired this with a roasted asparagus and red pepper salad, which made a delicious Sunday afternoon lunch. The croquettes are delicious, made with Manchego cheese and Serrano ham – quintessentially Spanish foods – and the entire meal brought back memories of the sunshine on a Barcelona afternoon.

METHOD
Cook the potatoes in boiling, salted water for up to 30 minutes. Drain and cool.

Push through a ricer, then mash together with the cream, butter, egg yolks, and Manchego cheese. Season with salt and pepper, and let chill for up to two hours.

Heat the olive oil in a cast iron skillet until smoking. Take the potato mixture from the fridge, and shape it into little croquettes, placing pieces of ham inside and folded over to enclose the ham. 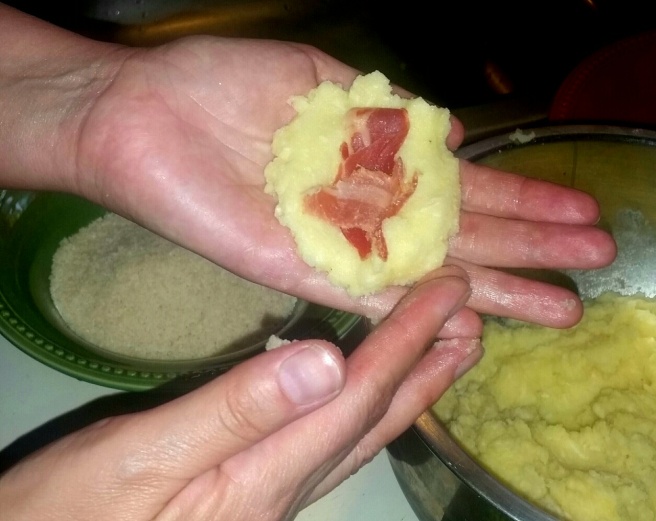 Repeat until you have several croquetas.

Whisk together the two remaining eggs with the milk and some salt. Mix together in another bowl the flour, breadcrumbs, parsley and oregano.

Dip the croquetas first into the milk, then roll in the breadcrumbs. 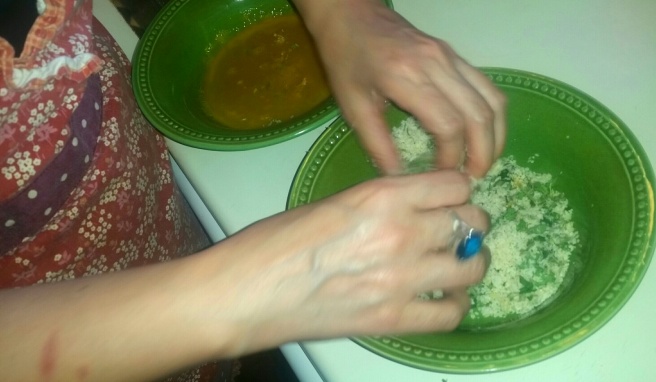 Fry for about 3 minutes per side, until golden brown. Drain on paper towels.