I don’t know about you, but I have an incredibly developed sense of smell. Annoyingly so at times, because I can pick out the scent of body odor from 50 feet away. My sister always tells me I have the “nose from hell” and there are times when it feels like hell to be able to smell so intensely. However, the flip side is that I can also smell wonderful, heavenly scents from miles off, like someone brewing fresh coffee, the scent of someone baking a few streets away, the difference in wine bouquets (and if the wine has turned and become oxidized) and many other smells that make up daily life.

If you think about scent, it’s perhaps the most immediate and visceral when it comes to memory association. I smell certain scents, certain perfumes or colognes, and I am immediately transported to certain places in my past. Smell can be considered a type of defense mechanism when it comes to food because if we can’t visually determine if something is “off,” one good whiff of it can keep us from food poisoning. So can you imagine either not having any sense of smell, or in this case, having the most intense sense of smell ever? 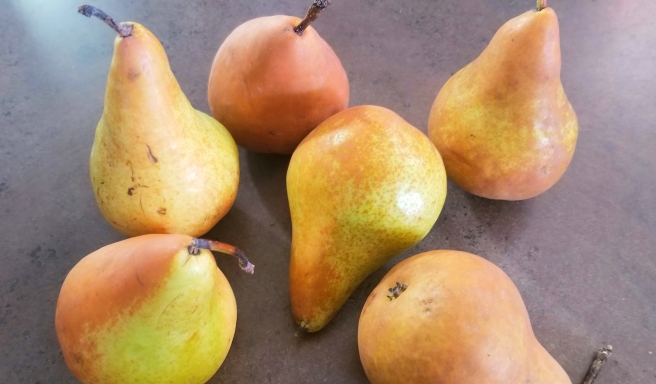 Jean-Baptiste Grenouille is the anti-hero of this book, born in a fishmonger’s market in Paris in the mid 1700s. (Can you get more French than that?) He is ordinary in every way other than the fact that he has no scent to him whatsoever but he has an abnormally developed sense of smell, so intense in fact that he is able to discern the individual scents of people as well as objects. He becomes a perfumer, working for various powerful people as he develops his own obsession in creating the ultimate scent. 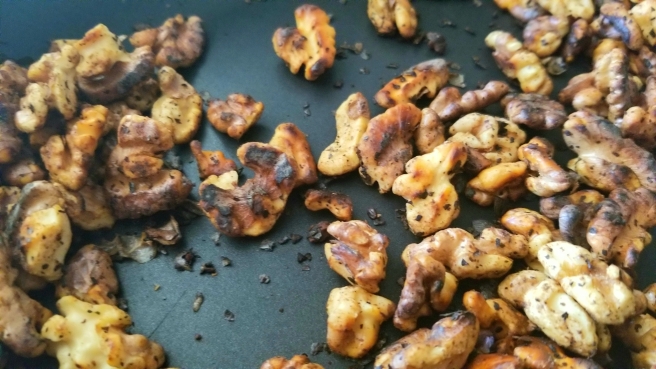 The kicker? He must kill the people who emit the scents that he finds so enticing and irresistible. Of course, they mainly tend to be young virgins because their scent is so pure to him that he must have it. So begins his career as a murderer in tandem with creating perfumes to sell to the public. His scent obsession is creepily psychosexual as he deeply inhales every single part of the women he kills, including their genitalia. 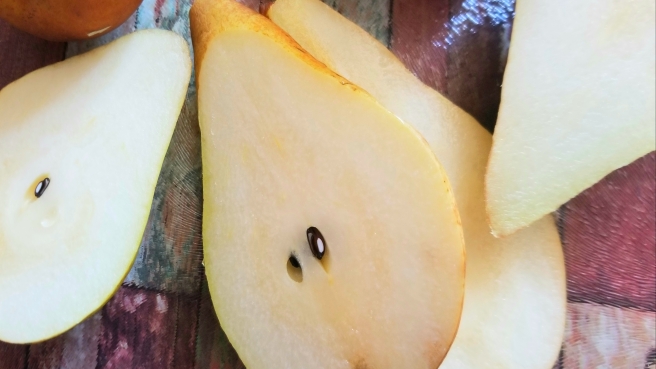 Grenouille is so talented at creating scents that he is able to create the scent of anonymity, so that he is able to navigate the world around him, picking out the scents of virginal young women and murdering them to keep their scent, without being noticed. He is eventually so inconspicuous that people who normally wouldn’t give away their own breath have no problem giving him everything he needs or wants. 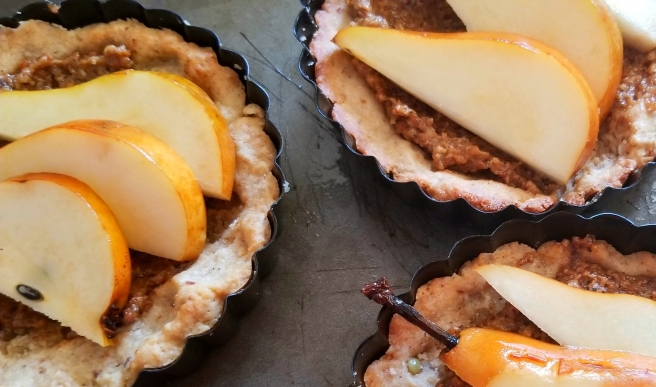 Once they caught a whiff of him, the market women filled his pockets with nuts and dried pears because he seemed to them so hungry and helpless. And the butcher’s wife, an implacably callous old hag if there ever was one, let him pick……

METHOD
Mix half the sugar, half the toasted walnuts and salt in a food chopper and process until you have a flour-like texture. 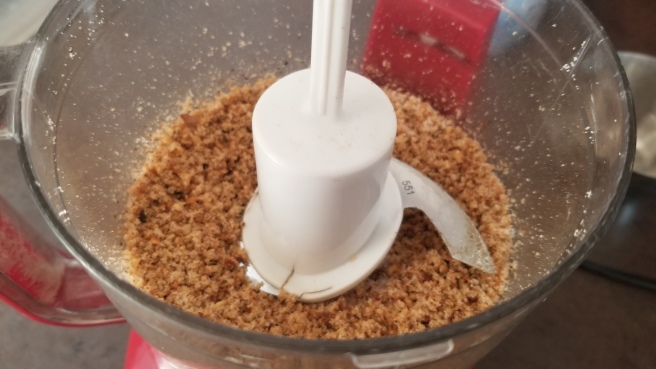 In the bowl of your most awesome red Kitchen Aid and using the pastry hook attachment, add the flour, the sugar-walnut mixture, and mix together, gradually adding in one butter cube at a time until a rubbly dough forms.

Add in the yolks and mix again, scraping the sides as needed, until a ball of dough forms. Wrap the dough in plastic and refrigerate until you’re ready to use it.

Heat the oven to 400F and press the dough into each mini tart pan. Mine are non-stick with removable bottoms, which makes life so much easier.

Line each tart crust with foil and add some lentils or beans or baking weights to each and blind-bake for 15 minutes, then let cool. (NOTE: Don’t forget to line with foil like I did, dummy that I am. I spent 15 minutes picking lentils out of the blind-baked crust. Yes, I’m a moron at times.)

Mix together the other half of the walnuts and sugar in the food chopper, until you have a coarse texture, then add in the butter, egg, flour, and salt and mix again until smooth.

Slice the pears lengthwise and put in a large bowl with the sugar, brandy and lemon juice for about 15-20 minutes, until the pears start to release their juice. Drain.

Spread the walnut filling into each tart pan.

Arrange sliced pears over the walnut filling in each pan so they overlap. As I’ve said before, I am the world’s worst cake decorator and we can include tarts in that category. But hey, at least you know mine are homemade, right?

Put a small sprig of rosemary on each tart, arrange the tarts on a baking sheet and bake until golden, around 30 minutes. 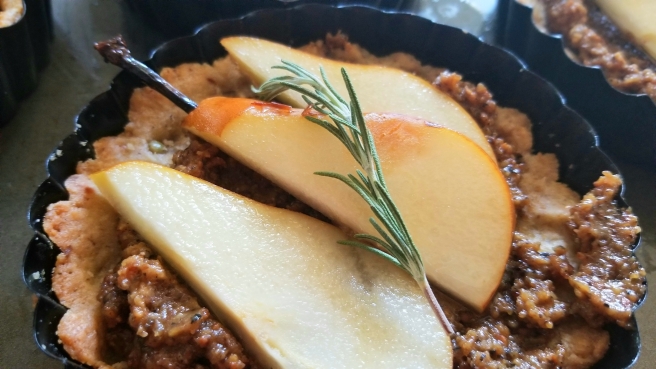 Once completely cool, push each tart out of the pan from the bottom and serve. The smell of toasted nuts and baked pears spiked with rosemary is out of this world, and likely would invoke the murderous instincts of Grenouille.

15 thoughts on “Perfume: The Story of a Murderer by Patrick Suskind”