I originally posted this blog in May 2017.  Today marks two years from the date that my idol Anthony Bourdain died. One of my biggest culinary influences, as well as someone who changed my worldview in general, I loved, respected and honored his work and who he was as a human being. I hope you enjoy this repost.

Original posting: May 2017: Oh, that damn Monday fish. Anthony Bourdain, to whom I refer affectionately as “my future ex-husband,” is never going to live that down. I didn’t eat a Monday fish special at a restaurant for  five years after reading Kitchen Confidential. Of course, in his updated version of that classic foodie memoir, he recants in his inimitable style by saying “eat the fucking fish on Monday, already!”

Bourdain is as snarky and smart-assy as they come. God, I love him. His attitude of irreverence, particularly within an industry that traditionally holds male chefs on very high pedestals, is refreshing. Though he is somewhat of a hypocrite in how he has previously mocked celebrity chefs like Emeril Lagasse and Rachael Ray whilst simultaneously pursuing his own brand of foul-mouthed celebrity, I can’t help but like the guy. He’s funnier than hell, can cook like an angel, curse like a devil, drink like a sailor, and is one of those men that just get more handsome and sexy with age. He’s welcome to eat crackers in bed with me anytime.

What sets him apart is that he doesn’t take himself seriously, either in his writing or his cooking. He’s a good chef and he knows it, but he regularly mocks himself, and I like that in a person. We none of us should take ourselves so seriously in life, because we are all going to screw up eventually. I also like that he doesn’t have any arrogance toward his staff and he gives credit where credit is due – to the hardworking cooks, sous-chefs, servers, bakers, prep cooks, dishwashers and all the unseen migrant men and women behind the scenes who make the food.

Without these workers, restaurants would shut down. They are the true backbone of the service industry, and I say this having worked for several years in the restaurant business myself; as a table busser, a hostess, a waitress, and a cashier at a well-known Mexican restaurant; and as a cocktail waitress at a couple of dive bars while in college. 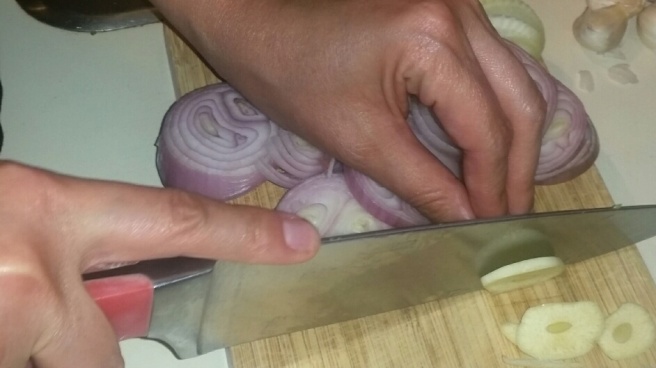 It was fun, but physically demanding and mentally exhausting. I got yelled at by customers and dropped numerous glasses of water working in the restaurant business; I got my butt pinched so often as a cocktail waitress that I think it’s permanently bruised; and for years after I left the Mexican restaurant I could not look at a bowl of salsa and basket of tortilla chips without gagging. I respect the hell out of people in the service industry, and Bourdain respects them, too.

Well, my dear future ex-husband, I am going off the rails a little bit and making this dish in your honor ON A MONDAY! I’m taking you on, baby, and making that yellowfin tuna in a braised fennel, confit tomato, and saffron sauce. Except, with my usual recipe edits. This is the method that worked for me, based on this New York Times tasty recipe.

Bring a large pot of water to boil. Cut a small slit across the bottom of each cherry tomato. Put the tomatoes and unpeeled garlic cloves in the boiling water for 30 seconds. 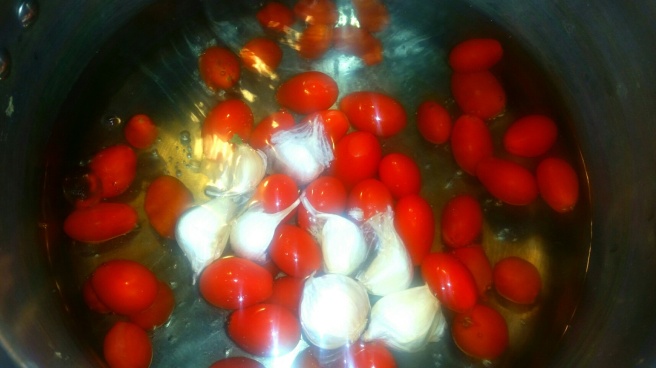 Drain in ice-cold water to blanch, then remove the peels from each tomato. This will probably take a good 20 minutes.

Put the tomatoes and garlic in a baking pan, submerge in olive oil, add the dried and fresh herbs, sea salt, and pepper. Cover in foil and bake for 30 minutes. Allow to cool thoroughly, peel the garlic cloves and mash, mix with the tomatoes, then store in a jar.

Heat the remaining two tablespoons of olive oil in a nonstick skillet, over medium heat. Add the shallot, garlic, and fennel, and cook about 5-7 minutes. Season with salt and pepper, and let cook while you prepare the tuna. 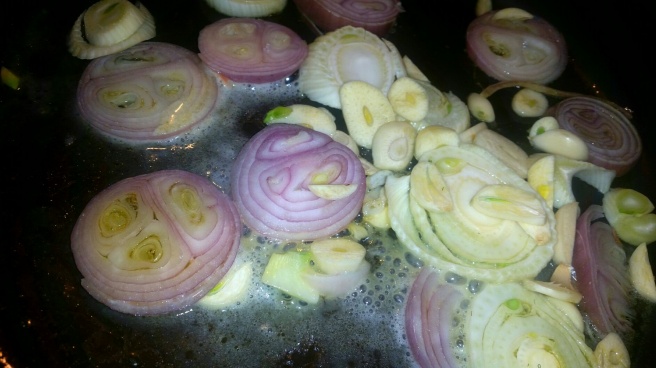 In a small pan, heat the seafood stock to just boiling. Add the saffron threads, squeeze in the lemon juice, stir together, and let simmer.

Heat a cast-iron stovetop grill to high. Salt and pepper the tuna steaks, oil them lightly on both sides, and sear them each for 30 seconds per side.

Place the tuna steaks on top of the shallot, garlic and fennel. Grate over the lemon zest.

Pour over the seafood stock, check for taste and seasoning, cover and cook on low for another 5-7 minutes, until the fish is cooked through. Don’t let it overcook! 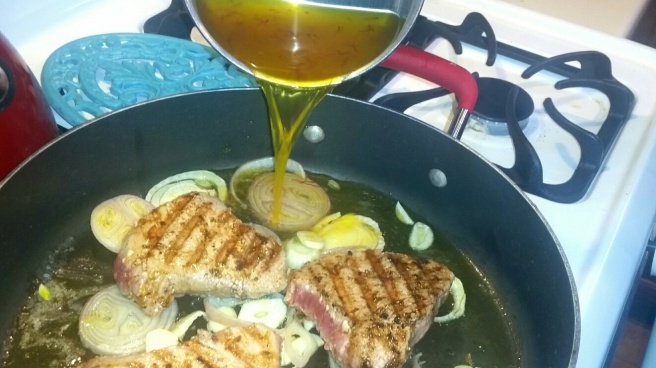 Plate and garnish with the gorgeously red tomato confit, and maybe some black rice. It makes a stunning presentation on a plate, and better  yet, tastes delicious. Anthony, I think I did you proud!